Translated by Hermes from:

Edited by Gates of Vienna:
The report about the French cop-killer was all over the news this morning, but none of the English-language bulletins mentioned his ethnicity or gave his name. It was necessary to open the French news sites to find the name “Abdallah Boumezar”.

There were also Spanish-language reports that included the culturally enriched aspects of the case. Our Spanish correspondent Hermes sends this summary from Alerta Digital: 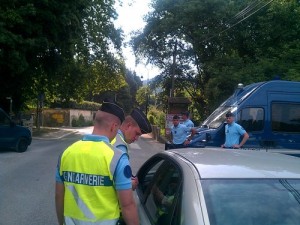 The killer of the two French policewomen was, of course, a man from the Maghreb — freshly released from prison.

Abdallah Boumezar, the man suspected of having murdered the two policewomen in the village of Collobrieres, has confessed that he was the one who shot and killed Alicia Champion and Audrey Berthaut, the two French police officers. This 30-year-old man from the Maghreb was released from prison last September after having served a sentence of six years.

Last week he was sentenced to liberty under probation for having attacked his mother. The two policewomen had gone to the scene because of an alleged case of burglary. The confessed assassin shot Audrey Berthaut twice, and afterwards began to run after Alicia Champion, shooting at her six times at point-blank range.

Here’s more about the case in French.

Videos may be found here.

4 Replies to “The killer of the two french policewomen was, of course, a man from the Maghreb – freshly released from prison.”