The Zionist Organization of America (ZOA) is demanding that Florida Atlantic University (FAU) condemn the recent actions of the University’s Students for Justice in Palestine organization (SJP). The activities of FAU’s SJP organization work to create an environment where Jewish students may feel harassed, intimidated or unsafe, and where their privacy and civil rights may be violated. Contrary to the public statement of the Anti-Defamation League Florida office, this was not an isolated incident. The ZOA is again strongly urging FAU’s administration to apply strict scrutiny to all of SJP’s activities, both on and off campus, and to specifically condemn the use of hateful rhetoric by campus groups even though it may have to be tolerated as legally protected free speech.

On March 31th the ZOA began receiving phone calls from students and concerned families reporting that FAU’s SJP organization had posted fake eviction notices on hundreds of on campus residences. 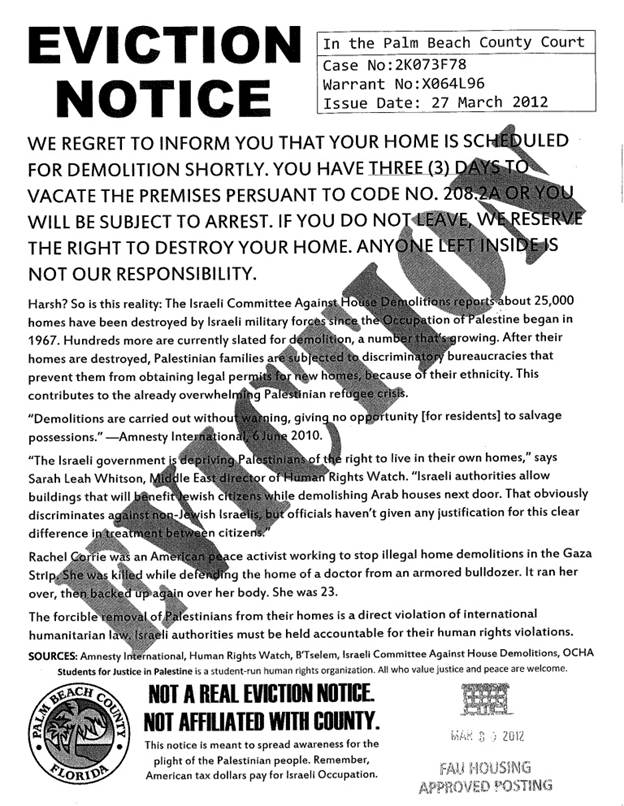 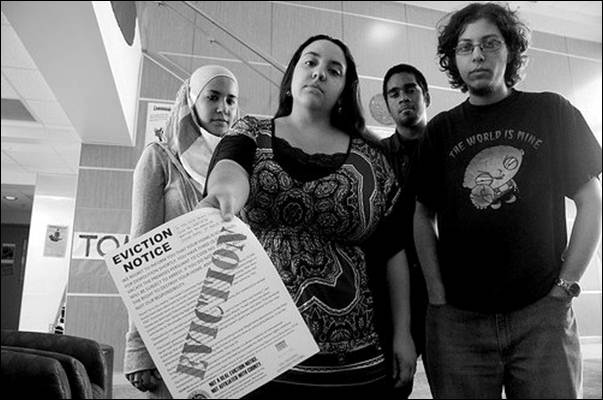 The fake eviction notice also included a seal and authorization stamp from FAU’s student housing authority, which were in fact issued by the university. Despite this, Dr. Charles Brown, the school’s senior vice president for student affairs, said the university did not condone or authorize the fliers. According to SJP a yet to be identified FAU employee actually escorted the group as they posted the papers on dorm doors and elevators. Nevertheless, FAU has publicly recognized that “The recent mock eviction postings did not comply with the policies of University Housing and Residential Life or the Office of Student Involvement and Leadership concerning the distribution of printed material.”

It is important to note that FAU has accepted responsibility for the incident, both publicly and in conversation with ZOA, in so far as a university employee seems to have improperly provided the stamp of approval and escorted SJP. The ZOA believes that these actions were clearly a matter of administrative recklessness and were not intentional.

The Content of the Eviction Flyer was Anti-Semitic in Nature

The U.S. Commission on Civil Rights studies and analyzes all kinds of civil rights and discrimination issues and reports its findings and conclusions to the President and the U.S. Congress. In November 2005, the Commission examined the problem of anti-Jewish bigotry on campus. At the Commission’s invitation, the ZOA testified at the hearing. The Commission recognized that anti-Israel and anti-Zionist sentiment can cross the line into anti-Semitism, and in their words “should be distinguished from legitimate discourse regarding foreign policy.” The Commission minced no words about how abhorrent such speech and conduct are, stating: “Anti-Semitic bigotry is no less morally deplorable when camouflaged as anti-Israelism or anti-Zionism.” The Commission specifically called on university leadership to publicly speak out and “set a moral example by denouncing anti-Semitic and other hate speech, while safeguarding all rights protected under the First Amendment and under basic principles of academic freedom.” The U.S. Department of Education’s Office on Civil Rights has made the same request of university administrations.

In March 2008, the U.S. State Department issued a detailed report on anti-Semitism globally, which the Department described as a rising problem. It is important to note that the State Department recognized that anti-Zionist sentiment and criticism of Israel can cross the line into anti-Semitism. Whether intended or not, such sentiment and criticism may have the effect of promoting prejudice against Jews. As an example, the State Department noted that demonizing Israel and/or Israelis “as barbaric, unprincipled, selfish, inhumane, etc. is anti-Semitic and has the effect of causing audiences to associate those bad attributes with Jews in general.” This is often referred to as the 3-D methodology – Demonization, Delegitimization and Double-Standards. This is precisely the kind of stylized anti-Jewish bigotry that we often see promoted by Students for Justice in Palestine. It is no less hurtful or harmful than more traditional forms of anti-Jewish bigotry, and universities have the moral and legal obligation to address it if and when it occurs.

The fake eviction notice used by FAU’s SJP make use of a modern day blood libel intended to portray Israel as barbaric, unprincipled and inhumane by suggesting that anti-Israel and anti-American activist Rachel Corrie was deliberately and maliciously murdered by Israel. In fact, Rachel Corrie was accidentally killed while she attempted to interfere with an Israeli counter-terror operation clearing out brush areas in a declared war zone used to conceal weapon smuggling tunnels and prepare attacks against Israel. Her death was an accident stemming from her own recklessness, yet it remains a frequently lied about propaganda tool used to demonize Israel.

The fake eviction notice used by FAU’s SJP also makes false assertions intended to delegitimize and demonize Israel by implying that it engages in institutionalized racism. This is among the favorite tactics of SJP, and has been well documented at FAU. The flyer states: “Palestinian families are subjected to discriminatory bureaucracies that prevent them from obtaining legal permits for new homes because of their ethnicity.” Statements such as this are in fact entirely contrary to the truth. The use of such untrue propaganda statements and illegitimate criticism to defame Israel and Zionism is anti-Semitic in nature and has the effect of causing audiences to associate those bad attributes with Jews in general. 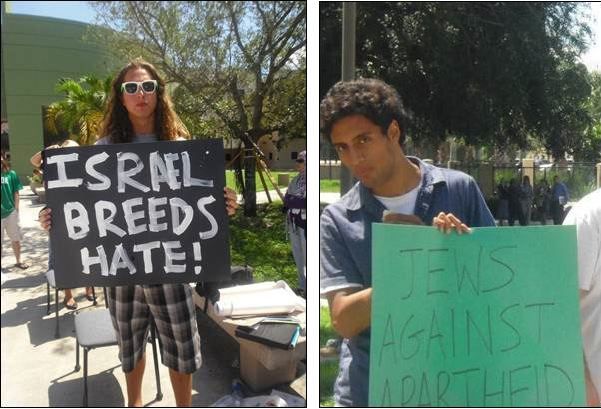 FAU Students on campus in September 2011  ***Note: Student with “Jews against Apartheid” sign is not Jewish.

The ZOA remains concerned that incidents of this nature are likely to occur again, in part because Florida Atlantic University’s response to previous incidents and the present matter have not gone far enough. This assertion is made on two bases: 1) While FAU has rightly condemned the form of SJP’s activity, it has refused to condemn the substance of their hateful, anti-Semitic message, which includes the use of a modern blood libel and false statements; 2) FAU had previously been put on notice about its SJP organization engaging in demonstrations calling for violence and Israel’s destruction. The present incident therefore must be viewed by FAU in the context of a series of egregious activities that unquestionably merit condemnation and discipline.

ZOA met with FAU officials in September 2011 to share evidence documenting the SJP organization’s increasing radicalization. One of the University’s participants in this meeting was Dr. Charles Brown, the school’s senior vice president for student affairs. Anticipating increased anti-Semitic activity from SJP, ZOA provided him with a copy of the policy letter issued by the U.S. Department of Education’s Office for Civil Rights on October 26, 2010, clarifying FAU’s obligation to protect Jewish students from anti-Semitic harassment and intimidation under Title VI of the Civil Rights Act of 1964. Three of FAU SJP’s activities were primarily discussed at the meeting.

In January, 2011 FAU’s SJP – then known as the FAU Palestinian-American Organization (PAO) before rebranding in summer 2011 – participated in a troubling organizing conference sponsored by the American Muslims for Palestine organization (AMP). Flown in to lead the conference were two AMP employees, both of whom are notorious anti-Israel agitators. Taher Herzallah was one of the ring leaders of the now infamous Irvine 11, who were convicted for harassing Israeli Ambassador Michael Oren to the point that he was unable to deliver a lecture at the University of California. Basil Ali is AMP’s campus coordinator from the Chicago area who has also sought to harass and stymie pro-Israel presentations on college campuses. An ADL report documenting AMP’s efforts to foment and coordinate student anti-Israel activity was shared with FAU’s administration.

In May, 2011 the student president of FAU’s PAO, who presently remains the president of the rebranded SJP chapter, publicly participated in the organizing of “Miami’s Third Intifada Rally for Palestine” in front of the Israeli consul general’s office. Invitations to the Third Intifada rally were sent to all of FAU’s PAO members and the organization’s president spoke at the rally on behalf of the student organization. The terminology and imagery used to promote the rally were taken directly from the ‘Third Intifada’ page that Facebook took down in March, 2011 after great public outcry over its racism and call to violence. The local event tied into broader calls for a “Third Intifada” to be launched against Israel on May 15, 2011. “Intifada” is a term which means “violent uprising” and has no alternative meaning. Thousands of innocent Israeli women, children and civilians were killed and injured during the first two Palestinian Intifadas. It is no coincidence that as FAU’s PAO student organization and others were calling for a Third Intifada on May 15, 2011, Israel was simultaneously being attacked on three of its borders by violent mobs. 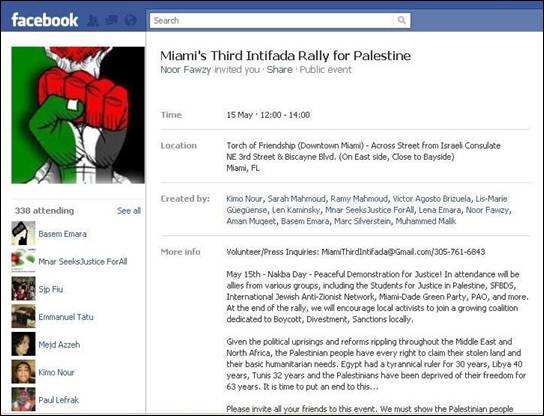 In June, 2011 FAU’s PAO president was an organizer and host of the “Freedom Flotilla II” rally which was again held in front of the Israeli consul general’s office. Video footage was captured of FAU’s SJP president participating in the rally’s chanting of “Long live the Intifada” and “from the river to the sea Palestine will be free.” Again, “Intifada” is a call to violence and “from the river to the sea” is a call for Israel’s destruction. These expressions have no alternative meaning, which is a fact recognized by several members of Congress who contacted FAU and other South Florida universities out of concern after having seen the video. The footage is attached to this release for the public to see for themselves. 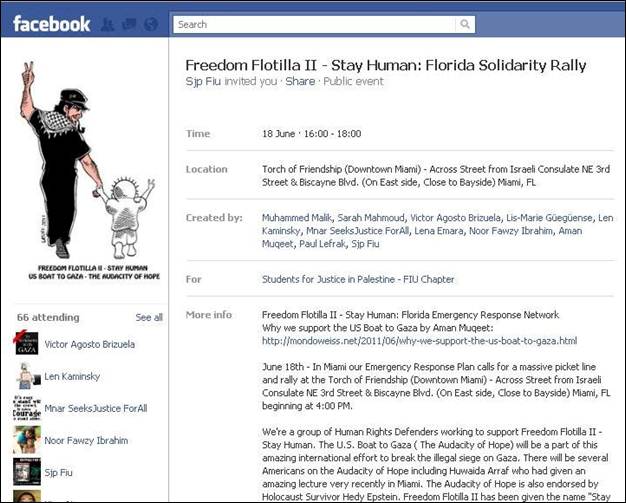 Free Speech is not the Issue

The First Amendment right of Students for Justice in Palestine to espouse hatred and anti-Jewish bigotry is not in question. SJP does have a general right to continue such activities within the limits established by the University’s code. The issue at hand is the response by Florida Atlantic University’s administration. While the University may be forced to tolerate expressions of hate and bigotry from SJP, it is by no means prohibited from condemning such expressions or the student groups who use them. In fact, FAU has an affirmative legal and moral obligation to speak out and identify hate and bigotry on campus in order to ensure the safety and rights of all members of the university community, and to prevent receptivity among naive and unsuspecting students to false and biasing messages. Simply saying “we don’t condone it” does not go far enough.

The ZOA is now strongly urging Florida Atlantic University to take several steps to safeguard against an anti-Semitic environment on campus, including:  (1) immediately speak out and publicly condemn the anti-Semitic acts of Students for Justice in Palestine both on and off campus; (2) apply strict scrutiny to all of SJP’s activities, past present and future, and apply appropriate disciplinary measures under the University’s code; (3) implement all necessary protocol and procedures to prevent any apparent endorsement by FAU of any of SJP’s activities; and (4) promote education among administration officials and staff about the University’s obligation under Title VI to ensure a campus environment that is physically and emotionally safe and conducive to learning for all students.