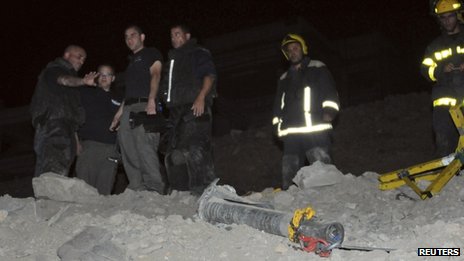 Israel and the Palestinians

A Grad rocket has landed in the southern Israeli city of Eilat, but has caused no damage or injuries, Israeli security officials said.

He said it struck a construction site close to a residential area shortly after midnight (21:00 GMT).

The blast took place as thousands congregated in the resort town for the Jewish holiday of Passover.

Rocket attacks from Egyptian soil are uncommon. Attacks on Eilat and the nearby Jordanian town of Aqaba in 2010 killed one person and injured another four.

Eilat Mayor Meir Yitzhak-Halevy told the Jerusalem Post that the city would function as normal despite the attack.

A wave of unrest has hit the restive Sinai peninsula recently.

Israel says militants have become active in the region since former Egyptian President Hosni Mubarak was overthrown in February 2011.

In August 2011, an armed group crossed the border into Israel from the Sinai peninsula and killed eight Israelis.