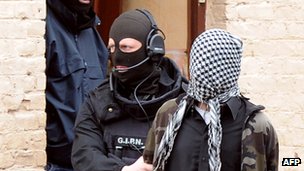 Police in France have conducted new raids on Islamist suspects in the wake of the multiple killings by gunman Mohamed Merah.

At least 10 people were arrested as police conducted operations in several locations, mostly in the south.

Meanwhile 13 people arrested in raids last week were charged with terrorism and nine of them remanded in custody.

President Nicolas Sarkozy vowed to crack down on suspected radical Islamists after the Merah killings.

Most of Wednesday’s raids were in the south and south-west, notably in Marseille but also in Carpentras, Valence and Pau, police sources told Agence France-Presse news agency.

There was also a raid in Roubaix, close to the Belgian border.

The raids were organised by the DCRI intelligence agency and carried out by elite Raid and GIPN commandos.

One police source said: “Those arrested have a similar profile to Mohamed Merah. They are isolated individuals, who are self-radicalised.”

He told Reuters they were tracked on Islamists forums expressing extreme views and that they were planning to visit Afghanistan, Pakistan and West Africa to wage jihad, or holy war.

The operation comes less than a week after raids that targeted men who are believed to be associated with a radical group called Forsane Alizza, or Knights of Pride, which was banned last month.

The group’s leader Mohamed Achamlane is one of nine people remanded in custody while police investigate allegations that they stashed weapons and plotted to kidnap a judge.