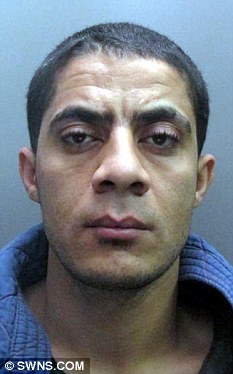 An asylum seeker has been jailed for punching a woman to the ground and raping her in a historic park – after being freed while he awaited deportation.

Palestinian Ali Aboalkassem, 29, was arrested by the UK Border Agency a year ago after he entered Britain illegally in a bid to claim asylum.

But immigration officials released him back into society on bail while they made arrangements for him to be deported.

The attacker approached his 32-year-old victim as she walked through Parker’s Piece, in the middle of historic Cambridge, and asked her for a light for a cigarette, then offered her an alcoholic drink.

When she declined he grabbed her and dragged her off the path, silencing her screams with punches before raping her on the grass.

He then stole her mobile phone and fled, leaving the distressed woman to flag down a passing cyclist who called the police.