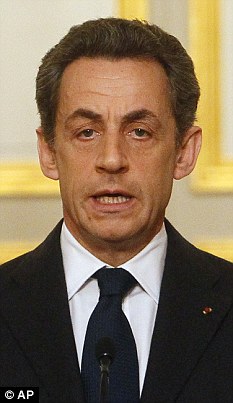 France is to ban radical Muslim preachers from entering the country as part of a crackdown after shootings by an al Qaeda-inspired gunman in Toulouse, President Nicolas Sarkozy said today.

The President said he would block the entry of some imams invited to an Islamic conference next month, organised by the Union of French Islamic Organisations (UOIF).

The UOIF, one of three Muslim federations in France, is regarded as close to Egypt’s Islamist Muslim Brotherhood.

‘I have clearly indicated that there certain people who have been invited to this congress who are not welcome on French soil,’ Mr Sarkozy told France Info radio.

The crackdown follows the murder of seven people in Toulouse by Islamic extremist Mohammed Merah, 23.

The gunman shot down a Rabbi, three children and three soldiers in three separate attacks before being shot dead at the end of 32-hour police siege.