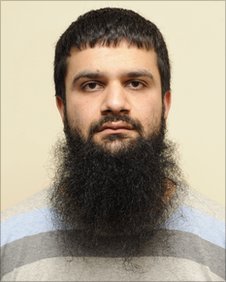 A former teaching assistant has been jailed for five years and three months for donating £9,000 to fund terrorism in Somalia.

Shabaaz Hussain, 28, gave the money in 2010 to three of his friends who left the UK to allegedly become involved in terrorism in the east African country.

Extremist material was also found in his flat in Stepney, east London.

Evidence was gathered against Hussain when police secretly recorded conversations he had in his car.

Passing sentence at Woolwich Crown Court the judge, Mr Justice Calvert-Smith, said: “These were, as you realised, substantial sums for people living, most likely, in basic conditions in countries like Somalia and Kenya.

“You certainly realised, in my judgment, that some of it would be used either directly or indirectly to help to resource acts of terrorism.”

Hussain confessed to seven counts of fundraising for terrorists.

In total he donated £9,114 which went to Muhammed Jahangir, Tufual Ahmed, and Mohammed Shahim, known as “The Somali Three”.