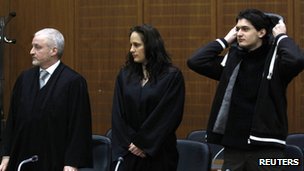 A young Kosovan man who admitted shooting dead two US airmen at Frankfurt airport last year has been sentenced to life in prison.

Arid Uka, now 22, is a Muslim ethnic Albanian who was born in Kosovo but grew up in Germany.

Uka was convicted on two counts of murder and three of attempted murder by the court in Frankfurt.

The American servicemen were travelling from the UK to the Ramstein airbase near Frankfurt.

US soldiers Nicholas Alden, 25, and Zachary Ryan Cuddeback, 21, were killed in the shooting.

Two other airmen were seriously injured in the attack on a bus at the airport.

A jammed gun prevented Uka from shooting a fifth airman in the head.

Uka said during his trial that he had been radicalised by jihadist propaganda videos he had watched online.

Prosecutors said he had wanted to kill the airmen because they were going to join the Nato-led force in Afghanistan. He had no known contact with Islamist groups, they said.

As the sentence was read out, Uka had his arms folded and did not move, German press agency DPA reports.

The court ruled that Uka bears “particularly severe guilt”, meaning that it is unlikely that he will be considered for parole after 15 years, which is normal with German life sentences.

At the start of the trial, Uka admitted the killings and apologised for them, saying he did not know why he did it.

Arid Uka was born in the Kosovo town of Mitrovica but grew up in Germany. At the time of the attack, he was apparently working at the airport.

More on this here:

One Reply to “Frankfurt airport gunman jailed for life”