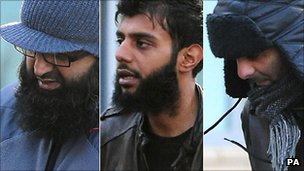 Three Derby men have been jailed for giving out leaflets calling for homosexual people to be executed.

Ihjaz Ali, Kabir Ahmed and Razwan Javed were found guilty at Derby Crown Court last month, of stirring up hatred on the grounds of sexual orientation.

The leaflet, titled Death Penalty?, was distributed in the build-up to a gay pride event, in July 2010.

Ali was jailed for two years while Ahmed and Javed were given 15-month sentences.

It is the first prosecution of its kind since new laws came into force in 2010.

The leaflets, which were handed out and put through letterboxes near Derby’s Jamia Mosque, were described in court as “threatening and nasty”.

They showed an image of a wooden mannequin hanging from a noose, quoted Islamic texts and said capital punishment was the only way to rid society of homosexuality.

Two other leaflets, called Turn or Burn and God Abhors You, were also distributed while a fourth, called Dead Derby, was found but not given out. 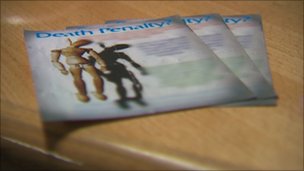 Ali, 42, of Fairfax Road, Ahmed, 28, of Madeley Street, and Javed, 28, of Wilfred Street, had claimed they were simply doing their duty as Muslims to condemn sinful behaviour in society.

Two other men, Mehboob Hussain and Umar Javed, who were also charged with the same offence, were found not guilty.

Judge John Burgess said: “You have been convicted of intending to stir up hatred.

“It follows that your intention was to do great harm in a peaceful community.

“Much has been said during the course of this trial about freedom of expression, and the freedom to preach strongly held beliefs; beliefs, which may have some foundation in scripture.

“Freedom of speech is a cornerstone of democracy and a basic ingredient of any free society.

“Parliament clearly had this very much in mind when this legislation was passed.”

Ben Summerskill, chief executive of Stonewall, said: ‘Gay people in Derby – and their friends and families – will feel relieved to see these extremists kept away from the community that they terrified with their deeply offensive and threatening leaflets.