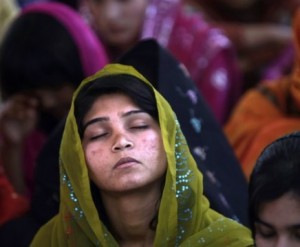 Bharti, A 15 year-old, is the 18th Hindu girl to have been reportedly abducted, forced to convert to Islam, and forced to marry a Muslim man, in the Lyari area of Karachi, a city in the south of Pakistan, the Express Tribune of India reported yesterday. The real number is probably much higher. In 2009, in the province of Sindh 18 Hindu girls had also been kidnapped.

The family of the teenage girl filed a complaint with Bhagdadi police station, and a court hearing has begun. On the first day of the hearing Bharti — who has been renamed Ayesha, apparently after the favorite wife of Islam’s prophet Mohammed — appeared “clad in a black ‘abaya’ ” and hardly acknowledged her parent’s presence.

According to The Times of India, her father “[Narain] Das brought a copy of the National Database and Registration Authority’s record, which states that his daughter is 15 years old. However, certificates of her conversion to Islam and her marriage claim she is… read more.

4 Replies to “Hindu girls abducted, forced to convert to Islam — a growing trend in Pakistan”