A teenage student stabbed to death and dumped in a canal was groomed for sexual exploitation by adults from the age of 12, it has been revealed.

Laura Wilson, 17, had been tracked by social services since 2005 after she was identified as being ‘at risk’ of sexual exploitation by British Pakistani men.

But their work focused on other girls who were more closely associated with abusers in Rotherham, South Yorkshire. 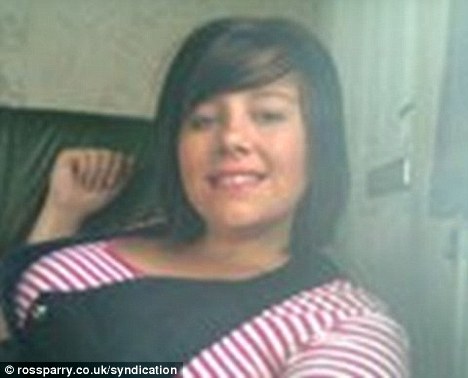 Laura Wilson had a brief fling with near neighbour Ishaq Hussain, 22, and gave birth to their daughter in June last year

The white teenager was the victim of a cycle of sexual abuse and little was done to help her, Laura’s family have claimed.

Rather than removing her from the situation, social services only carried out ‘preventative’ work to stop her falling into the clutches of abusers.

The student was murdered in October last year after bringing ‘shame’ on two Asian families.

She had a brief fling with married Ishaq Hussain, now 22, and became pregnant with his child while she was in a sexual relationship with Ashitaq Asghar. 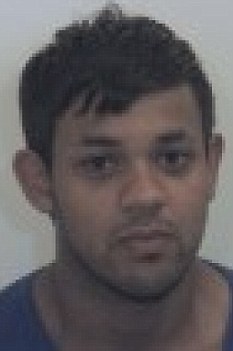 A few days before she was murdered and dumped in the canal she had revealed to the two families that she had had affairs with both men.

After being informed of the relationship, Asghar’s mother apparently hit Laura with a shoe. she said her son would never have a baby with a white girl and caleld Laura a ‘dirty white b****’, and she should ‘keep her legs closed’.

The teenager had become pregnant just a month after she turned 16 and gave birth to Hussain’s child in June last year.

Asghar pleaded guilty to murder in May, while yesterday a Sheffield Crown Court jury cleared 22-year-old Mr Hussain of Laura’s murder after deliberating for nearly 11 hours.

They adopted the language of the cult British film ‘Four Lions’, a dark comedy about Islamic terrorists plotting an attack which was filmed in Sheffield and which they had both seen.

Asghar sent a series of texts to Mr Hussain using language from the film.

Asghar talked about buying a ‘shooter’ for £400 and he boasted about bringing his ‘hit list’ out. In fact, said Mr Campbell, the murder weapon of choice turned out to be a knife.

In one message, Asghar said to Hussain the day before she died which read: ‘I’m gonna send that kaffir (non-Muslim) b**** straight to hell’.

Mr Campbell QC described Laura as ’embracing life with gusto and she was an attractive and popular girl’.

Hussain told the jury he did not plot anything with Asghar and there was no plan to kill Laura.

Simon Csoka, representing Mr Hussain, said his client ‘was an unfaithful philanderer whose attitude to women absolutely stinks…but although he’s guilty of many things, he’s not guilty of murder’.

The Rotherham Safeguarding Children Board have carried out an investigation into Laura’s death and the findings will be published in around a month. 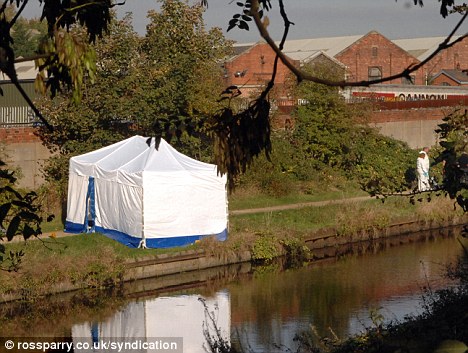 The teenager’s body was found in this canal in Rotherham, Yorkshire. The tent pictured was put up by scenes of crime officers

Chairman Alan Hazell said more could have been done to help the teenager.

‘Whilst not wishing to pre-empt that report, it is clear that Laura’s situation was very complex, which made it difficult for agencies to engage with her.

‘However, there were times when agencies may have worked differently or more effectively.

‘All agencies which had links with Laura have taken part in the review and have already shown a strong commitment to learn any lessons the case has highlighted.

‘This commitment has already been reflected in the work done to improve services for children and young people in the borough following challenge from the Government.’

He added that the case had been both ‘complex and tragic’.

‘This was a despicable crime in which a vulnerable young woman was viciously attacked and left for dead,’ he added.

‘It has left a young child without a mother and we hope that the earlier conviction which has been secured will help her family and friends as they continue to come to terms with what happened.’

Laura’s links with Risky Business – the town‘s child exploitation project – Risky Business, and the fact that the relevant authorities knew she was having under-age sex with Pakistani men did not come up in the murder trial and has never been publicly acknowledged, the Time reported.

Earlier this year an investigation by the same newspaper triggered an assessment of street grooming. The Times uncovered a pattern of child-sex offending involving Pakistani men and girls aged 12 to 16.

2 Replies to “Groomed for sex at 12, stabbed to death at 17: Shocking life of white teenage mother ‘murdered after Asian lover rejected her child’”