This is a part of the article.. 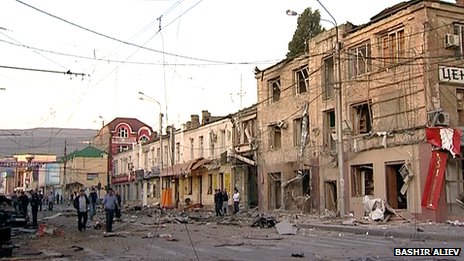 Continue reading the main story
Once it was Chechnya, today it is the republic of Dagestan on the Caspian Sea that is the most explosive place in Russia – and in Europe. There are bomb attacks almost daily, shootouts between police and militants, tales of torture and of people going missing.

Two armed men in camouflage holding Kalashnikov rifles enter the shop and tell the customers to leave. The terrified cashier stumbles past as one of the men puts a bomb on the counter and sets the timer.

He does not bother emptying the till, he just walks out of the door.

Seconds later, the shop is filled with smoke.

Attacks like this one caught on supermarket security cameras – in which Islamic fighters punish shops that sell alcohol – have become routine events in Dagestan’s capital, Makhachkala.

The owners typically get a warning first, often delivered by text message, or on a USB memory stick thrown through car windows, or into a letterbox.

If they ignore it, there may be a bomb or a shootout or the owners may agree to pay protection money.

“The fighters like to portray themselves as so devout,” says a lieutenant colonel in the anti-terrorism police, who I will call Bashir.

“But many are just cynical criminals running protection rackets.”

The atmosphere inside the stadium was relaxed, even joyful, with old men munching sunflower seeds and children waving flags, despite the heavy security outside.

After the game, a smiling Eto’o told me he was proud to play in Dagestan – but he does not spend much time here, heading straight back to the safety of Moscow after every match.

In the centre of Makhachkala, there are armed police on almost every corner.

Bashir drives me past a place where two car bombs recently killed a policeman and a young girl and wounded 60 police and passers-by.

“When our guys rushed to the scene of the first explosion, a blast about 12 times more powerful went off,” he adds. 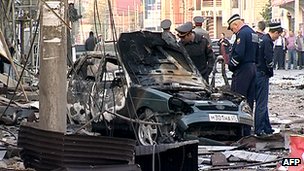 “It was a trap. They wanted to get as many of us as possible.”

He asks me not to use his real name, or to photograph his face. Government officials and policemen are the main targets of the increasingly ruthless Islamic insurgents.

4 Replies to “Dagestan – the most dangerous place in Europe”