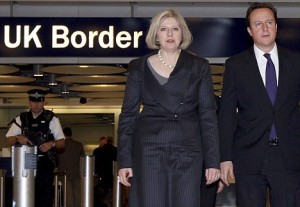 Nearly 4,000 foreign criminals who should have been deported are at large on the streets of Britain, an official report revealed last night.

Human rights claims and red tape are giving them their freedom while they fight deportation orders.

The criminals include dozens of former prisoners convicted of  offences such as murder, rape and sex crimes against children.

The figure emerged in a report by John Vine, chief inspector of the UK Border Agency.

He revealed there were 3,775 criminals in May this year who had been released from immigration detention centres because there was ‘no prospect of them being deported in a reasonable time’.

Of those, 3,259 had served sentences for low-level offences, another 429 for ‘more serious’ crimes, and 87 for the most serious offences – including murder, rape and paedophilia.
Read more: http://www.dailymail.co.uk/news/article-2053981/4-000-foreign-criminals-set-free-fight-deportation-including-murderers-rapists-child-sex-offenders.html#ixzz1bzZh7c5e