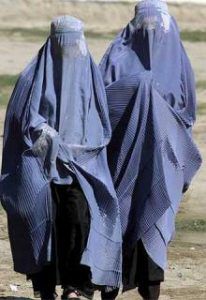 One of Britain’s leading political critics of Islamisation has spoken out again, this time in opposition to the abomination against women’s rights that is the burka.

The good thing about Abhijit Pandya is his refusal to “take the bait” over Islam. For him suggesting the issue is one of race, culture, or freedom of religion, is erroneous. The encroachments Islam represents are obviously: political; no matter how much Muslims, and others, would like to falsely claim them as “religious”.

This is why it is the duty of politicians to grapple unflinchingly with the subject, and as an Englishman, it’s fantastic to see a second generation immigrant like Pandya robustly proclaiming the traditional values, liberties and freedoms which once made Britain great.

It’s the kind of thing all of us long the political establishment in the UK to have the guts to do. But as the last year’s proven, the stifling paralysis of PC is just as complete under this Conservative-led government, as under the last Labour one.

Why NOT to converse or interact with someone in a burka

Time magazine named her one of most of the important women of the 20th Century stating: ‘she shaped an idea of women for our time; she shook society into a new pattern from which there could be no going back’. ‘She’ was none other than Emmeline Pankhurst, who began the successful movement to have the right to vote for women. [the Suffragettes]
…
The acts of [the] suffragettes [who] rotted in prison on hunger strikes due to their campaigns for their right to vote are greatly diminished not only at the wearing of the burka in Britain today, but in our appalling tacit toleration of it.

Some of us, who are rightly concerned, often, wrongly, merely grind our teeth rather than raise our voices in this time of censorship through political correctness. If this is done through a fear of being branded a racist, this is misconceived- as it simply cannot be racist to want to emancipate a female from oppression, particularly where they are of another race.

Whether one agrees with it or not, much state and social activism has been spent on teaching women about not accepting abuse from their husbands, of not being bullied in relationships and of fighting the idea that a traditional house-wife is not permitted to have ambition outside the home, such as work.
…
I, for one, could never indignify the woman’s rights movement’s women by having a conversation with a woman in a burka. That piece of clothing is a marked symbol of difference not just of cultures, but of a want of a basic human decency that supports true respect between the genders.

6 Replies to “The Burka: not just a piece of cloth. On basic human decency and true respect between the genders.”