Don B. was good enough to search for the version of this story that actually included the names of the perps. As one can easily guess, the BBC seemed to omit this seemingly trivial detail of this horror story. It is also interesting that comments have been disabled on the original site for “legal reasons”. You can comment here though.

From The Lancashire Telegraph 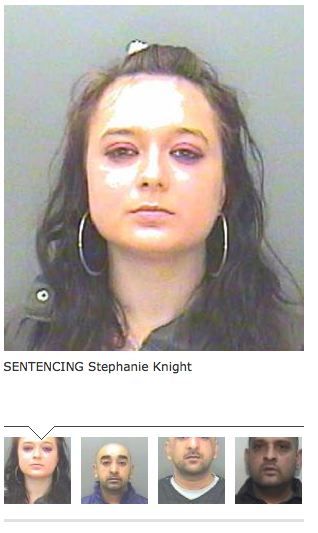 A woman who lured two 16-year-old girls on a night out to be raped by three men has been today sent to a young offenders institute for seven years.

Stephanie Knight, who was 17 at the time, lied to her victims that they were going out to a nightclub.

Instead they were driven around and plied with alcohol and drugs before they were sexually assaulted by brothers Amjad Hussain, 34, and Shahid Hussain, 38, and their cousin Tanveer Butt, 39.

All three male defendants were jailed indefinitely at Preston Crown Court and ordered to serve at least seven-and-a-half years before they can be considered for parole.

The girls, who cannot be named for legal reasons, were taken from Blackburn to a derelict terrace house in Accrington with no electricity as one of the girls was subjected to a “terrifying ordeal”.

Knight, now 19, and Butt then stopped her going to the assistance of her friend, who was crying out while being raped, as she told her “she is chilling with my boys”.

Knight’s former boyfriend, Amjad Hussain, then raped both girls as he drove them home in December 2009.

The prosecution said both victims had known Knight for only up to a week and had not previously met any of the other defendants.

After she lured them out for the evening, Knight was heard to say “got them” in a mobile phone conversation and named the girls.

Knight, who has been in local authority care since the age of 11, said she first met Amjad Hussain six months earlier when he pulled up beside her in the street in his car and asked for her mobile phone number.

They went on to have a sexual relationship and she said she later fell in love with him.