An excellent and important article taken verbatim from Gates of Vienna:

This is the first in a series of three essays by our Norwegian correspondent The Observer. In these articles he will examine Norwegian media bias, the AUF, and their support for certain terrorist groups. He will also discuss the Muslim community in Norway and their undemocratic nature.

Left-Wing Media Bias in Norway
by The Observer

I’ve decided to write this essay in order to try and shed some light on the media response in the wake of the terrorist attack in Oslo. I will compare this response to that following similar terrorist attacks carried out by radical Muslims, and will try to highlight the disparity in the way the media are reporting these incidents. Many individuals in the conservative community in Norway have claimed that they have been treated unfairly by the media in the aftermath of these attacks, and unfortunately they have a valid point.

I will also look at the way certain political parties and organisations in Norway, including AUF, view organisations that engage in terrorist activities. In addition I will be taking a closer look at the Muslim community in Norway, and give some examples that raise serious doubts about the MSM claim that this community strives to embrace Western values. I will provide examples that show that certain members of this community pose a serious threat to Norwegian society.

The terrorist attacks in Norway are unique in several ways:

In this incident, however, where the perpetrator is a non-Muslim with extremist right-wing views, the entire conservative community in Norway have been implicated by certain political commentators and the MSM. Conservative, anti-Islam blogs and individuals that have expressed critical views of Islam have been vilified and indirectly accused of ‘emotionally’ contributing to the attacks. The media’s main argument is that these groups have somehow inspired Anders Behring Breivik to resort to violence by means of fervent rhetoric against the Muslim community and the political establishment. 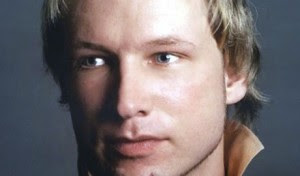 Just a few days after the attacks, Norwegian political commentator, Petter Nome wrote an open letter for the Spanish newspaper El Mundo in which he placed a significant part of the blame for the terrorist attacks on the Progress Party (FrP), whose only crime is that they have been highly critical of the Norwegian asylum and immigration policies, and voiced their concerns about the rapid growth of Islam in Norway (verbatim quote):

To You who Nourished the Killer

The Norwegian Progressive Party is the second largest party in Norway, holding 41 out of 169 seats in the Parliament. Their leader, Ms Siv Jensen, claims she was shocked when Mr. Breivik turned out to be one of their former members. She certainly was, and her tears were falling. But did she ever carry one single brick to the bridge most of us are trying to build between people and cultures? She never did. Did she ever try to make electoral catches with her talk about “Islamisation” and “national” and “Christian” values? She did, almost every day.

Ms. Jensen is not a supporter of violence. Neither are most of her colleagues in populist and right wing parties in Europe. But they should not be left with their shock and swollen faces. They carry profound responsibility for actively creating a climate where hate and violence appear as options for their most impatient followers.

In this letter Petter Nome claims that the rhetoric used by the Progress Party, and in particular by its leader Siv Jensen, has somehow created an atmosphere in which Anders Behring Breivik felt justified in committing these atrocities. Mr Nome arrived at these conclusions only days after Breivik carried out the attacks, and without ever having met Breivik in person. Mr Nome justifies his accusations with the fact that Siv Jensen has used the terms ‘Islamisation’, ‘national’ and ‘Christian values’ in speeches and in interviews.

It’s not unreasonable to argue that most people would have a hard time understanding Mr Nome’s train of thought in this case. How can anyone construe the use of such terms as justification to go out and kill 77 innocent people?

Of course, Nome and his cohorts know deep down that the Progress Party has no blame in this tragedy. The massive blitz against the conservative community carried out by the Left is nothing but a massive smear campaign aimed at discrediting political parties and commentators on the right that have opposing views. It is designed to intimidate others from voicing similar opinions in the future. If Nome had been sincere in his criticism of the Progress Party, he would have had expressed similar criticism of the Muslim community in Norway whenever Islamic radicals carry out terrorist attacks. But whenever Islamic terrorists massacre innocent people, Mr Nome and his allies choose to remain silent, and the only statements they make are meant to deflect any suspicion away from the Muslim community.

When the news of Mr Nome’s infamous letter finally reached the Norwegian media, it was heavily criticised by several political commentators for its viciousness, and even the Foreign Minister, Jonas Gahr Store, criticised it in harsh words, labelling it a cheap attempt to score political points in the wake of the terrorist attack. Mr. Gahr Store also went on record saying that the only one who could be held accountable for the massacre was Breivik himself.

But Mr Nome wasn’t the only one viciously attacking the Progress Party. Several others joined him in the verbal Progress Party bashing. Professor of Medicine Per Fugelli wrote an equally vile opinion piece in Dagbladet on August 5, 2011: