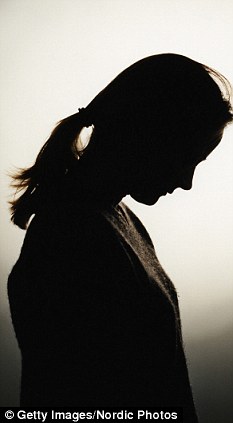 The witness was suggested to be a “compulsive liar” and a “wicked woman” by defence barrister Tayyab Khan. (Picture posed by model)

A judge was forced to intervene after a barrister tried to force an alleged victim of child-sex grooming to read out graphic details of her alleged abuse.

The witness, suggested to be a ‘compulsive liar’ and a ‘wicked woman’ by defence barrister Tayyab Khan, is one of seven alleged victims in a sex exploitation trial at Stafford Crown Court.

But the 19-year-old, who cannot be named, left the stand in tears as she was asked to read out her account of an alleged sexual assault on her by her step-father – unrelated to the sex exploitation trial – that she made to police in 2005.

The teenager was asked why she had retracted her claim her step-father raped her when she was 13.

She said when she told her mother, the allegation was reported to police, but she retracted it a day later to protect her ‘because I didn’t want my mum to be upset’, the jury was told.

The alleged victim, the third of the seven alleged victims to give evidence at the three month trial, insisted it was not a false allegation, according to The Times.

Mr Khan suggested she had invented the story and asked her to read out details of the abuse she claimed to have suffered.

Crying, she read out a section of her account, and broke down a second time. 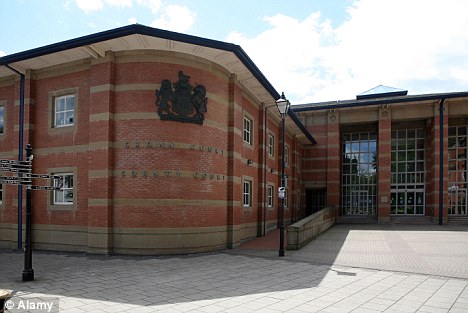 On the stand: The witness is one of seven alleged victims in a sex exploitation trial at Stafford Crown Court pictured

After some members of the jury shook their heads at her distress, judge Robin Onions stepped in and said: ‘It’s extremely painful for the witness, Mr Khan. Why can’t you read it to her?’

Later, Mr Khan said: ‘You are a compulsive liar. You have told lies about my client, also?’

The lawyer said she had told lies about his client, 23-year-old Ahdel Ali, who with his brother Mubarek Ali, 28, is accused of arranging her prostitution in 2008 and 2009.

Seven men from Telford have denied more than 50 charges relating to sexual exploitation and child prostitution.

The teenager claims Ali took her to have sex with two workers at a Wellington restaurant.

According to the BBC, the witness said: ‘Were you there? You don’t know anything. He did take me to the restaurant.’

She began to cry and swore at Mr Khan when she was asked about a separate incident in 2009 involving a middle-aged Asian man.

After returning to the stand, the teenager said she had punched the man when he ‘tried to put his hand up my mate’s top.’

Mr Khan said the man had been supplying the girls with alcohol but the witness had threatened to make a rape claim against him when he refused to give them any more.

Mr Khan then branded the witness a ‘very wicked woman’ and suggested she had invented malicious allegations.

She denied that she had made any false allegations.

The men live in the Wellington and Sutton Hill areas of Telford and deny charges related to incidents alleged to have happened between 2007 and 2009.