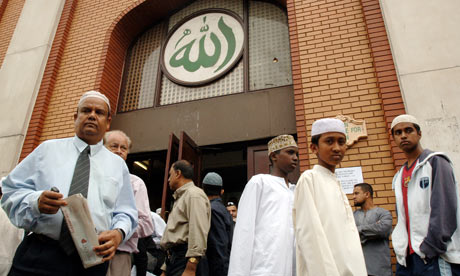 The East London Mosque said: ‘Any speaker who is believed to have said something homophobic will not be allowed to use our premises’. Photograph: Linda Nylind for the Guardian

Gay rights campaigners have urged mosque leaders in east London to ban homophobic clerics from using their premises, following a 21% rise in gay hate crime in the area.

Activists, including journalist Julie Bindel and Pride trustee Colm Howard-Lloyd, said some preachers at the East London Mosque and the London Muslim Centre had “created an atmosphere in which hate is socially acceptable; they have spread a message in which maiming and violence is the most dutiful, honourable, devout thing to do”.

Their concerns follow the £100 fine given to Mohammed Hasnath, who put up “Gay-Free Zone” stickers in the area; the case of Oliver Hemsley, who was paralysed from the neck down in August 2008 following a vicious attack; and Metropolitan police figures showing that gay hate crime had risen in the borough of Tower Hamlets – where the mosque and adjoining centre are located – from 67 attacks to 81 in a year.

In a statement, the campaigners said that while the East London Mosque and the London Muslim Centre had distanced themselves from the sticker campaign, they had “hosted numerous hate preachers who have promoted the most vicious homophobia imaginable over the years”.

Salman Farsi, from the mosque, said booking procedures had been tightened since last year.

“Any speaker who is believed to have said something homophobic will not be allowed to use our premises, whether that is us organising an event or someone else. As for the condemnation of homophobia, our director has gone on the record on this.

“I can see where the lesbian, gay, bisexual and transgender community is coming from. That £100 fine was a slap on the wrist. One of the things that needs to be noted is that there are a small number of extremists in our community that are stirring things up. We have done as much as we possibly can. The LGBT community need to take that in good faith.”