The judge who said she “could not imagine a more racist incident” desperately needs a reality check. 1. Islam is not a race and what this guy did was no more racist or criminal than if he left copies of Saving Private Ryan outside Nazi headquarters during a meeting on the final solution. Or opening a Che T shirt stand outside communist party headquarters. He did something that was offensive to an offensive ideology. If the judge wants to know what real racism sounds like, she should go to any 3 mosques anywhere on earth and perhaps especially in the U.S. and U.K. Clearly she pretends that what was shown in ‘Undercover Mosque‘ was a series of isolated incidents and the exception that proves the rule as did the events in Undercover Mosque 2, the return.

A racist thug who stuffed ham into the shoes of Muslim worshippers at a mosque has escaped a jail term.

Jamie Knowlson, 30, also draped slices of the meat – which Muslims are banned from eating – on railings outside the mosque as his victims prayed inside.

He was then caught on CCTV hurling abuse at worshippers after they confronted him over his sacrilegious act.

Islam teaches its followers to avoid pig meat as it makes them impure and unclean.

Knowlson initially told police the stunt was a drunken joke but later admitted that he was fully aware of the offence his actions would cause.

He pleaded guilty to causing racially or religiously aggravated harassment and could have been jailed for up to two years.

But walked free from Bristol Crown Court with a suspended six-month prison sentence because he had returned to the mosque to apologise for his actions.

Sentencing, Her Honour Judge Carol Hagen said: ‘It is difficult to imagine a more offensive incident.

‘Not only the fixing of meat to railings but aggravated, in my view, that members of the mosque were inside praying at the time.’

The court heard that Knowlson, from Kingswood, Bristol, targeted the Al-Baseera mosque in the St Judes area of the city which is used by more than 2,000 Somali Muslims every week.

He crept to the mosque from nearby Redwood House homeless shelter on January 9 this year – putting ham in footwear and on railings outside the building as worshippers prayed.

CCTV footage showed him returning to the shelter, where he was confronted by the mosque’s caretaker Abdi Djmaa.

As Mr Djmaa returned to the mosque he heard shouts of ‘the next visit will be harder’, ‘bad meat’ and ‘girls’ coming from the direction of the building. 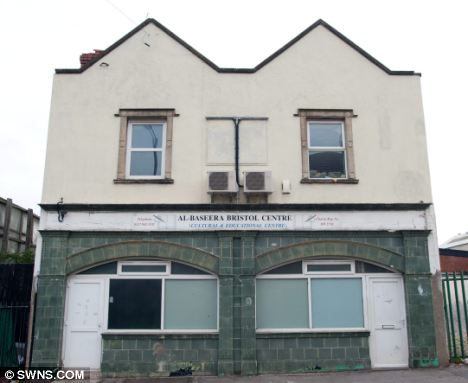 Offence: Knowlson was caught putting ham in the shoes of worshippers at the Al-Baseera Centre in Bristol

David Hunter, prosecuting at Bristol Crown Court, said it had been a premeditated attack specifically targeted at the Muslim community.

The court heard that shamed Knowlson had returned to the mosque to apologise after the hate crime.

He returned to the mosque and offered his apologies in person.

Knowlson sat in tears as he was handed a six-month suspended sentence  and 150 hours of unpaid work.

A second man is due to stand trial in connection with the incident later this month.

After sentencing, Mubarak Mohamud, one of the three imams at the Al-Baseera mosque, claimed the inflammatory act had upset the Muslim community.

He said: ‘There wasn’t anger, people were more upset and shocked.

‘We don’t eat pork and we are banned by our faith from eating it, as it makes us impure when we are going to our prayers.

‘We don’t hate the man – we just suppose he doesn’t know us.’