I have had numerous arguments, some with friends, on the nature of the EDL. Some of whom have refused to look at any actual evidence on them, deciding instead that they are a low-down organization of thugs and that’s all their is too it. One of them actually yelled at me and said “If I support the EDL then I am yesterdays man” and that was the end of that.

I prefer investigation to intolerance and prejudice myself.

In that spirit, here are two interesting and recent links on the English Defence League. The first, a speech by Tommy Robinson from ICLA

There is more at the ICLA link above, as well as at the EDL.ORG site here.

Second, this article from Daphne Anson here, a bit of which is quoted below…

The English Defence League on Jews and Israel 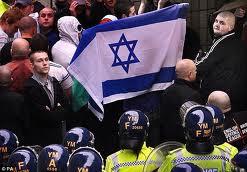 In an article entitled “Israel and the Unholy Trinity” the English Defence League (EDL), often depicted as a neo-Nazi organisation with links to the British National Party (BNP), unequivocally supports Jews and  Israel.

‘There is an unholy trinity that has come together to bring about what Palestinians shout at their demonstrations ‘From the River to Sea, Palestine will be free!’ It is a tripod of hate from the intellectually bankrupt Left-wing communists and right-wing fascists and Nazis, supported by Islamists. From the River to the Jordan to the Mediterranean sea Palestine will be established at the expense of the state of Israel. Yet there has never been a state of Palestine, there has never been an Arabic nation based in Palestine, it was invaded in the 7th and 8th Centuries by Arab Islamists seeking to spread their evil ideology to the world. Arabs were offered 80% of the British Palestine Mandate known as Trans-Jordan, but they rejected it. They wanted it all. Ever since, Muslims everywhere have sought and fought to bring about the destruction of the Jewish state.

Add this to the numerous articles and press releases from various UK security agencies admitting that most, if not all, the violence at rallies by the EDL have been started and sustained by either Muslims or the leftists of the self named, ‘Anti-fa’ and one begins to get a pretty good idea of who the EDL is, and what they are about. I wish them all the luck in the world and all the support I can offer.

5 Replies to “A couple of links on the EDL worth noting.”