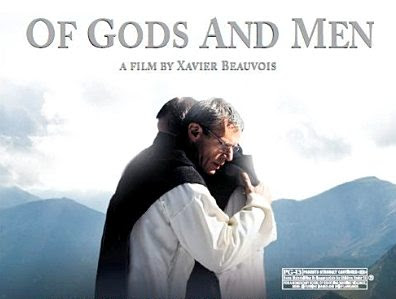 A French film entitled Of Gods and Men (Des hommes et des dieux), which won the Grand Prix at Cannes last year, has now been released with English subtitles. It is based on a true story of seven French monks kidnapped and massacred by Islamic bandits in Algiers in 1996.

Below is a review of the movie written for Gates of Vienna by the New York-based writer David Gurevich.

Of Gods and Men and Heroism of Faith
by David Gurevich

From pedophilia to corrupt Vatican banks, it has been a while since anyone in the media had a good word to say about the Catholic Church, one of biggest bêtes noirs of liberal media and artists. But in a new French movie by Xavier Beauvois called Of Gods and Men, such concerns are the last thing on the minds of eight monks quietly tilling their modest garden and treating villagers at the foot of Atlas Mountains in Algeria.

The monks are elderly and in poor health, but they happily persist in doing God’s work, and in between hoeing their garden and selling honey at the market and treating cases of eczema among local Arab children they never forget to praise the Lord. In fact, their choral singing, choreographed in a measured ascetic non-Hollywood way, makes for the most striking scenes. So how can such an unassuming group become a subject for such a richly dramatic and exceptionally timely film, based on the events that took place in Algeria in 1996?

Modernity invades abruptly. The anti-government Islamic Front issues an ultimatum: All foreigners must leave the country. At a nearby construction site, Croatian workers end up with their throats cut. The village elder’s granddaughter is stabbed for not wearing hijab. Finally, a local government official offers to post soldiers on the monastery territory (and is vehemently rejected) and then suggests that the monks should leave — “I can’t protect you.”

This is the real starting point when this deceptively simple routine of life of a religious community becomes a high drama of human heroism — and what inspires this heroism. Up until this scene, the Eight are rather nondescript old men in cassocks, save for their leader Christian (Lambert Wilson) and the elderly Dr. Luc (Michel Lonsdale).

As they debate whether they should leave or stay, they emerge as individuals, with their own human foibles and aspirations — one misses his family, his little grand-nephews and -nieces; yet he realizes that after so many years the monastery has become his real family, that serving God has glued them together as nothing else can, for it is the very meaning of the Faith and serving God that transcends human emotions. “I never meant to be a martyr,” says another. “But you already gave your life to God,” Christian argues.

And so they embark on this day-to-day struggle, trying to preserve faith in the face of everyday threats that come both from the Islamists who demand medical treatment and from the military who demand that the monks give up the rebels. And then there are the villagers who beg them to stay — “you are the branch, and we are the birds” — or, in other words, without you we’ll be done for. The monks cannot leave, and in a war like this the peaceful don’t survive.

Of course, there are political aspects of the movie to quibble with. The director plays down Islamic fanaticism and, following a liberal tradition, manages to make the rebels less repulsive than the government troops. Brother Christian’s last testament, portentously delivered off-screen, avoids any reference to Christianity and praises Islam. But perhaps this is what makes the film so timely — that this is where the beatific acceptance of a certain peace-loving religion takes you.

Artistically, too, Beauvois stumbles a bit — the real Trappist monks might well consider the choral scenes to be an expression of a sin of pride. But then he takes a lot of risks, and that deserves a hand. The most daring scene comes close to the end, when Brother Luc opens his last two bottles of wine and puts on a tape with — surprise! — the Swan Lake theme. The lush grandeur of Tchaikovsky’s music mingles with the flavor of wine you can almost taste, and it brings tears to the old men’s eyes.

Many will find this sequence over the top, with good reason; but to this viewer the scene was as much an expression of faith as Catholic chorales and a heartfelt celebration of some of our favorite things in the West — the music, the wine, and the ability of the most pious among us to enjoy them. (Surely some readers will note that none of these achievements can be claimed by “the religion of peace”).

Of Gods and Men won the Grand Prix at Cannes and is France’s official foreign-film submission for the Oscars. I suspect a surprise in the works.

For those wishing to read more on the subject, this is the Wiki article on the actual massacre.