(AINA) — In an effort to end any hope of the Coptic Christians using the Church of St. Mary and St. Michaels in Talbiya for prayer services, the Giza Governorate converted overnight a house facing the church into a mosque.

The new so-called “Ekhlass” mosque was converted secretly Thursday evening when a cloth sign was hastily hung outside a 4 story house. It was used on Friday morning, when over 3000 Muslims prayed there, despite the presence of a large mosque on the other side of the bridge, not far from the new mosque. It was reported that the owner of the house, which is still under construction, donated it.

“Of course the new mosque did not have to get a building license, local council or state security permission, as is the case with churches,” said Coptic activist Mark Ebeid.

Due to the minimum distance required by law between a church and a mosque, Copts view this conversion of the house into a new mosque “as a trick on the part of the government to make the completion and use of St. Mary’s Church an impossibility.”

“We are devastated,” said a local Copt. “This church cost the poor people 7 million Egyptian pounds, which we collected by having to go without a lot in our homes, and there comes the governor and state security, angry because we built a dome and destroy it, kill our children, leave others maimed and the rest in prison for a very long time.”

Church building in Egypt is still partly governed by the Haayoni Decree of 1856, when Egypt was under Ottoman rule. After gaining independence in 1922, Egypt abolished all laws except for the Hamayouni Decree, which required the permission of the king or the president to build a church. In addition, in 1934 the Interior Minister, Al-Ezaby Pacha, issued a decree that stipulated 10 conditions that must be met prior to issuance of a presidential decree permitting the construction of a church. The conditions include the requirement that the distance between a church and a mosque be not less than 100 meters and the approval of the neighboring Muslim community. Additional considerations or conditions are the number of Christians in the area and whether or not the proposed church is near the Nile, public utility or a railway.

The new Coptic Church of St. Mary and St. Michael’s, in Talbiya, Giza, was the scene on November 24 of security forces fire and using tear gas on women, children and youth who were present at the church, in order to halt construction of the church and demolish the building (video). The clashes between security and the Copts resulted in the death of three Coptic men from bullet wounds and a four year old child from a tear gas being thrown inside the chapel. More than 79 Copts were wounded, some severely, and 157 people including women and children, were all charged, with premeditated murder of a police officer, assaulting security officers, rioting, theft and destruction of public property (AINA 11-30-2010). 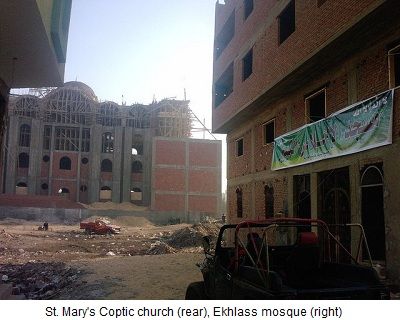 Video referred to above, embedded below: