From The Ottawa Sun

The alleged terrorist who once moonwalked across the stage auditioning for Canadian Idol was granted bail Wednesday.

Dr. Khurram Syed Sher didn’t dance out of the courthouse but did break out the robot in jail before attending the bail hearing, his lawyer Anser Farooq said.

Farooq said his client has a sense of humour and did the ’80s dance move at Ottawa’s provincial jail on Innes Rd. despite not knowing how Wednesday would turn out.

Sher stopped for a throng of media waiting for him outside the Elgin St. courthouse. Besides a “no comment” Sher didn’t respond to questions until a television reporter asked how the fresh air felt.

“It’s nice,” he replied with a small smirk.

Sher, 28, and co-accused Misbahuddin Ahmed, 26, and Hiva Mohammad Alizadeh, 31, are charged with conspiring with people in Canada, Iran, Afghanistan, Dubai and Pakistan to facilitate terrorism.

The reasons for Justice of the Peace Louisette Girault’s decision are covered by a standard publication ban.

Sher will reside at a family member’s home in Mississauga and have to report to the RCMP in Etobicoke once a week. He also can only use the Internet to continue his studies under supervision of a surety, as well as not communicate with the accused. His sureties posted a $183,000 bond.

“It’s going to take some time to sink in,” said Farooq of his client being on bail.

Farooq said their goal is to get the case moving along so Sher can clear his name. Farooq said he’s going to push to the Crown to reassess their case against Sher because he feels there isn’t enough evidence that implicates him.

Ahmed has already been granted bail but the Crown is appealing it. Alizadeh has yet to have a bail hearing.

Investigators with Project Samossa allege a plot to build and detonate bombs in Canada and raise money to help Taliban insurgents in Afghanistan.

Soon after his arrest, a video of Sher showed his awkward 2008 appearance on the Canadian Idol reality talent show.

Sher, then a 25-year-old McGill medical student, drew laughs and ridicule from the panel for his butchered rendition of Avril Lavigne’s hit song Complicated. 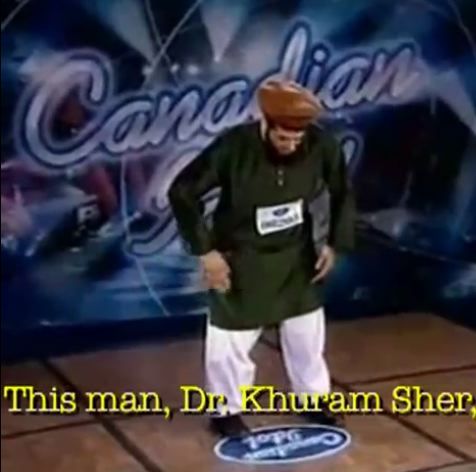 The young doctor had told the panel that he liked hockey, music and acting. He had been heavily involved in sporting events and student life as a medical student at McGill, where he graduated in 2005.

Sher left Montreal in June for a job as a pathologist in London, Ont.

Colleagues at St. Thomas-Elgin General Hospital were shocked when they learned of his arrest.