The Venezuelan government could shut down national steel and aluminum manufacturers as part of its electricity conservation plan, Globovision reported Jan. 4, citing Electric Energy Minister Angel Rodriguez. Rodriguez said that the measure could be necessary due to falling reservoir levels at the Guri dam

The Guri Dam is one of the largest in the world. It is located in Bolívar State, Venezuela in the Caroni River. Its official name is Central Hidroeléctrica Simón Bolívar (previously named Central Hidroeléctrica Raúl Leoni from 1978 to 2000). It is 1300 meters long and 162 m high. The construction started in 1963 with the first part concluding in 1978 and the second one in 1986.

It has long been the focus of much controversy, as the lake created by the dam forever destroyed thousands of square miles of forest formerly renowned for its biodiversity and rare wildlife, including the only place where the recently-discovered Carrizal Seedeater (a finch-like tanager) was ever found.

There are two machine rooms with ten generators each producing a total of 87 billion kilowatt-hours of electricity and saves 300,000 barrels of oil a day. The walls in room number two were decorated by the kinetic Venezuelan artistCarlos Cruz-Díez. 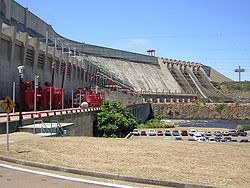 So, in other words, its one of the largest hydro electric plants on earth. Yet Venezuela seems not to have enough electricity to run its various industries despite being a net exporter of oil as well. Can anyone say ‘Central Planning’?

For anyone unfamiliar with Hayek’s most excellent book, ‘The Road to Serfdom’ here it is in classic comics version. Please have a look. It is the blueprint for failure in Venezuela now, and for Europe very soon.