Children as young as four should be monitored for signs of brainwashing by Islamic extremists, a leaked police memo states.

In an email to community group leaders, an officer in the West Midlands counter-terrorism unit wrote: ‘I do hope that you will tell me about persons, of whatever age, you think may have been radicalised or be vulnerable to radicalisation.

‘Evidence suggests that radicalisation can take place from the age of four.’

The email was written by a police sergeant trying to allay Muslim community concerns.
It was leaked to The Times.

However, the policy was last night condemned by the Tories and the Liberal Democrats.

Chris Grayling, the Shadow Home Secretary, said the policy runs the risk of ‘alienating even more people’, while Lib Dem home affairs spokesman Chris Huhne said it was an ‘absurd waste of money’. 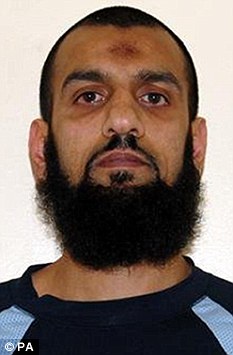 There have been concerns about the radicalisation of children since terrorist Parviz Khan was caught on tape indoctrinating his five-year-old son.

There have been concerns about the radicalisation of children in the West Midlands since a terrorist was caught on a surveillance tape indoctrinating his five-year-old son.

Parviz Khan was jailed for plotting to kidnap and behead a British soldier in 2008. He was recorded threatening to beat his own son if he did not swear allegiance to Osama Bin Laden and encouraged him to ‘kill’ America, George W Bush and Tony Blair.

Instead of easing concerns in the Muslim community, the email has instead inflamed tensions.

The sergeant wrote: ‘I am a police officer and therefore it will always be part of my role to gather intelligence and I will report back any information or intelligence which may suggest someone is a terrorist, or is planning to be one or to support others.

‘However, my role is to raise the level of awareness of the threat of terrorism and radicalisation and support and work with partners to try to prevent it.’

Sir Norman Bettison, who speaks for the Association of Chief Police Officers on the anti-terror strategy Prevent, said the email was a ‘clumsy’ attempt by the officer to explain the strategy.

Chief Constable Sir Norman said: ‘There is absolutely no example, nationally, of the police engaging with nursery-age kids specifically on this issue.

‘That is the age for learning about stranger-danger and the Tufty Club.’

But he added that the policy ‘is no different to addressing the harm of drugs or sexual exploitation’.

‘Prevent is a way of addressing those most vulnerable in an attempt to protect them,’ he said.

‘It is easy to give Prevent initiatives a kicking because it is viewed as intrusive but, the next time there is a terrorist outrage involving young people who have been radicalised, there will be a wringing of hands and people will say, “What more could we have done?”‘ 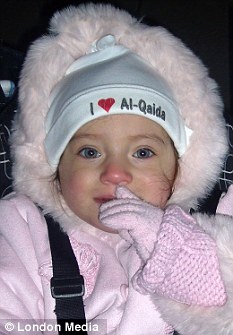 Controversy: Twenty-month-old Farisa Jihad sported inflammatory headwear during a protest outside the Danish embassy in London in 2006.

Arun Kundnani, of the Institute of Race Relations, contacted the officer who sent the email and asked for an explanation as to why counter-terrorism officers had visited nursery schools.

Mr Kundnani said: ‘He did seem to think it was standard. He said it wasn’t just him or his unit that was doing it.

‘He said the indicators were that [children] might draw pictures of bombs and say things like “all Christians are bad” or that they believe in an Islamic state.

‘It seems that nursery teachers in the West Midlands area are being asked to look out for radicalisation.

‘He also said that targeting young children was important because they would be left aware of what was inappropriate to say at school.’

The West Midlands counter-terrorism unit confirmed that an officer had visited a nursery school attached to a primary school and had spoken to staff.

‘But we are actually trying to get over the accusation that Prevent is about spying by being more open and we are reaping the benefits now with better engagement.’