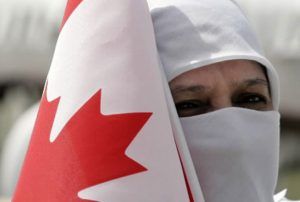 National Post… A Canadian Muslim group is calling on Ottawa to ban the wearing of the burka in public, saying the argument that the right to wear it is protected by the Charter’s guarantee of freedom of religion is false.

“The burka has absolutely no place in Canada,” said Farzana Hassan, of the Muslim Canadian Congress. “In Canada we recognize the equality of men and women. We want to recognize gender equality as an absolute. The burka marginalizes women.”

She said many women who cover their face in public are being forced to by their husbands and family. As a result, she argued, these women are denied opportunities and cannot live freely as other women in this society.

“The Koran exhorts Muslims toward modesty, which can be expressed in a number of different ways and it doesn’t have to be that you have to cover your face or you have to wear a virtual tent wherever you go. This is not a requirement of Islam or the Koran. We are saying this practice has become a political issue promoted by extremists and to counter this trend we are asking for a ban on the burka.”

The proposal calls for the banning of “masks, niqabs and burkas.” A niqab covers the face but allows the eyes to be seen; a burka covers the entire body and the eyes are obscured by a mesh covering.

“For me that is a huge embarrassment,” said Ms. Hassan. “It brings the kind of criticism Muslims [unfairly] face.”

Ms. Hassan said her group is bringing this up now because of an edict released this week in Egypt, by a top Muslim authority, calling for a ban on the burka.

Ms. Hassan said she is not asking for the banning of the hijab, which just covers the hair, but she would also like to see that custom vanish.

Professor Amir Hussain, who teaches theology at Loyola Marymount College in Los Angeles, but grew up in Toronto, said the fact that the burka is not in the Koran does not mean that it is not part of authentic religious practice and that many religions absorb cultural practices that eventually become sacred.

He said he does not believe there are enough women wearing the burka in Canada to call it a serious issue. But for those women who are being forced to wear it by family members, the best way to deal with it is to reach out to those women on an individual level.

He said any legal ban will infringe on fundamental democratic rights.

“In Turkey, a secular society, it is illegal to wear it. In Iran you’ll be punished if you don’t wear it. Either way imposing a belief on women.”

In the past few years, the debate over what kind of religious dress should be allowed has been loud and intense.

In June, French President Nicolas Sarkozy went so far as to call a parliamentary commission to look at whether to ban the wearing of burkas and niqabs in public. In France, religious headgear of any faith has already been banned in public schools.

Also in June, the Michigan Supreme Court amended its rules of evidence to give trial judges discretion over whether a woman can be fully veiled when testifying or when bringing accusations. The new rule did not mention Muslims but it will clearly affect Muslims.

Last year an Ontario judge said religious beliefs did not give a woman the right to wear a veil while testifying against her alleged rapist. The decision is now before the Ontario Court of Appeal.

In 2007, a Quebec election official created controversy when he said veiled Muslim women would have to take off their veil if they wanted to vote.

Wahida Valiante, chair of the Canadian Islamic Congress, said the right to wear a burka is absolutely covered by the Charter and no one can dictate what constitutes proper religious practice.

But she said by constantly bringing up a “miniscule” issue, that, too, skews society’s impression of Islam.

“If anyone ever finds this to be a huge problem I’d be the first one to participate in that discourse. There’s freedom of choice. Women can take their bra off and we don’t have any laws against that. So in that context a woman can choose to cover their face in this country.”

One Reply to “Muslim group calls for burka ban in Canada”