This is old news now. A branch of Al Queda moved into a mosque in Gaza and informed Hamas that they had become too liberal and that Al Queda was taking over and challenged Hamas to come and throw them out. A Challenge Hamas gleefully accepted. Below, is some footage allegedly taken by Fatah supporters of the execution of some captured Al Queda members by Hamas.
Very big thank you to Ron Tennenbaum for doing the translation. This is what it looks like when two separate factions of the religion of peace get together for a love in. One group clearly felt that the other had lost the way to perfect peace and needed to be killed for it.

From CTV Canada: (Forgive them, they are used to reporting hockey games) 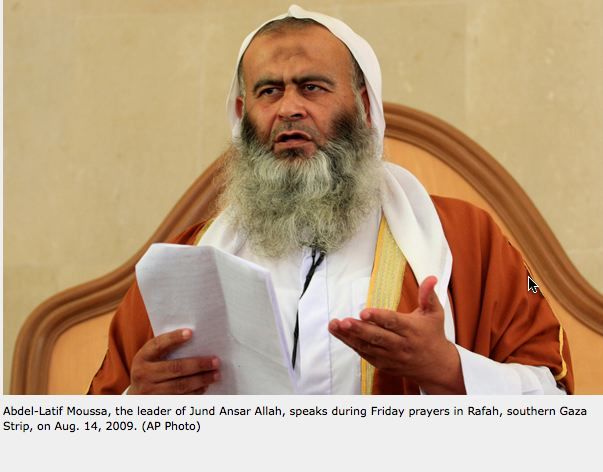 RAFAH, Gaza Strip — Hamas crushed an al Qaeda-inspired group in an hours-long standoff that came to a fiery end when a large explosion killed the radical Muslim group’s leader inside his Gaza home on Saturday.

The fighting was sparked by a rebellious sermon by the group’s leader, and his dramatic death put an end to the greatest internal challenge to Hamas’ rule since it took control of Gaza two years ago.

In all, the fighting claimed 24 lives — including that of a senior Hamas official who Israel says masterminded the abduction of an Israeli soldier. It was the highest death toll in the territory since the Israel-Hamas war earlier this year.

The crackdown targeted Jund Ansar Allah, or the Soldiers of the Companions of God, one of a number of small, shadowy groups that are even more radical than Hamas. The decisive confrontation, in which 95 group members were arrested, solidified Hamas’ iron rule in Gaza.

The radical groups have sought to expand the Palestinians’ battle beyond Israel to include the Western World as well. And in Gaza they have tried to enforce a strict version of Islamic law to which Hamas has not agreed. They have also attacked Internet cafes and wedding parties over behaviour they consider improper.

The crackdown highlights Hamas’ desire to limit its struggle to the Palestinian cause and to distance itself from militants espousing al Qaeda’s ideology, though the United States, Israel and others consider Hamas a terrorist organization.

The fighting broke out late Friday when Hamas security men surrounded a mosque in the southern Gaza town of Rafah on the Egyptian border where about 100 members of Jund Ansar Allah were holed up.

Their leader, Abdel-Latif Moussa, provoked Hamas by declaring Gaza an Islamic emirate during a Friday prayer sermon and warning its leaders against invading his mosque.

The Hamas forces raided the mosque, setting off a fierce gunbattle. Flares lit up the sky and the sound of machine-gun fire echoed throughout the night.

Moussa escaped with some bodyguards to his home where another standoff ensued. Early Saturday, an explosion went off as Hamas was trying to convince Moussa to surrender, said Ihab Ghussein, a Hamas Interior Ministry spokesman.

“The so-called Moussa has committed suicide … killing a mediator who had been sent to him to persuade him and his followers to hand themselves over to the government,” Ghussein told The Associated Press.

It is unclear whether Moussa detonated the explosives vest he was wearing, or whether it was one of his bodyguards.

Dr. Moaiya Hassanain of the Palestinian Health Ministry in Gaza said 24 people were killed, including six Hamas police officers and an 11-year-old girl. At least 150 people were wounded, he said.

Hamas confirmed one of its casualties was a high-ranking commander, Abu Jibril Shimali, whom Israel said orchestrated the capture three years ago of Sgt. Gilad Schalit, an Israeli soldier who is still being held by Hamas.

Jund Ansar Allah first came to public attention in June after it claimed responsibility for a failed attempt to attack Israel from Gaza on horseback. The group claims inspiration from al Qaeda’s ultraconservative brand of Islam, but no direct links have been confirmed.

The group has been critical of Hamas for not imposing a more severe form of Islamic law and for maintaining a cease-fire with Israel for the past seven months.

Hamas says it does not impose its religious views on others, but only seeks to set a pious example for people to follow. Hamas also maintains that its struggle is against Israel only, while the radical splinter groups call for a global jihad against the entire Western world.

“They are inspired by unbalanced ideologies and in the past they carried out a number of explosions targeting Internet cafes and wedding parties,” said Ghussein, adding that the groups do not have any external ties.

Israel has charged that terrorists with links to Osama bin Laden have infiltrated Gaza. Hamas has denied this, while trying to distance itself from the more radical groups.

“All of this unacceptable behaviour is rejected in our society. We are a Muslim community and we don’t need sick-minded people to dictate their agenda on our people,” said Hamas lawmaker Ismail al-Ashkar.

This weekend’s violence marked the most serious internal opposition Hamas has faced since it seized control of Gaza and ousted its rivals in the Fatah movement in a five-day civil war in June 2007.

The Gaza Strip and the West Bank are together supposed to make up a future Palestinian state, but the rival governments in the two territories — located on opposite sides of Israel — are complicating Palestinian efforts to gain independence.

Fatah official Saeb Erekat was quick to comment on the developments, saying “Gaza is going down the drain in chaos and lawlessness.”

Also Saturday, Hamas said it was investigating the launching of 11 homemade rockets from Gaza into Egypt. Only five of the rockets detonated, injuring a young girl, according to Egyptian security forces.

2 Replies to “Religion of peace has love in. 30 dead. Love shack toasted.”