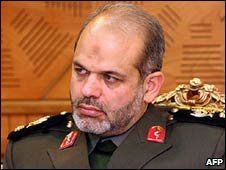 BBC NEWS…Iran’s defence minister-designate is on an Interpol “wanted” list over the 1994 bombing of a Jewish centre in Argentina, the agency has confirmed.

It says it has had a “red notice” for Ahmad Vahidi since 2007 over the Buenos Aires attack that killed 85 people.

Interpol uses red notices to inform its 187 member countries that an arrest warrant has been issued for an individual by a judicial authority.

Israel and Argentina have expressed concern over Mr Vahidi’s nomination.

“This is yet another of [Iranian President Mahmoud] Ahmadinejad’s actions that prove he is a person you cannot deal with,” Israeli Foreign Ministry spokesman Andy David told Bloomberg.

“Iran has always protected terrorists, giving them government posts, but I think never one as high as this one,” he said.

Tehran rejected the criticism as a “Zionist plot”.

Iranian lawmakers still have to confirm the 21-member cabinet proposed on Wednesday by Mr Ahmadinejad – the declared winner of June’s disputed presidential elections.

But the nomination of Mr Vahidi is another sign of Mr Ahmadinejad’s defiance of the West, the BBC’s Caroline Hawley says.

Interpol says that Mr Vahidi has been on its “red notice” list since November 2007.

The move to publish the notice for Mr Vahidi – along with five other people – followed a request by the Argentine authorities.

Mr Vahidi – who was deputy defence minister during Mr Ahmadinejad’s first term in office – is accused of involvement in the bombing of the Israeli-Argentine Mutual Association (AMIA) building in Buenos Aires.

It was the worst attack on a Jewish target outside Israel since World War II.

Mr Nisman said that Mr Vahidi, who led a unit of Iran’s Revolutionary Guard known as the Quds Force at the time of the attack, was accused of “being a key participant in the planning and of having made the decision to go ahead with the attack” against the AMIA.

“It has been demonstrated that Vahidi participated in and approved of the decision to attack AMIA during the meeting in Iraq on 14 August 1993”, the prosecutor said.

“How come they didn’t bring it up in the past?” President Ahmadinejad’s press adviser, Ali Akbar Javanfekr, told the AFP.

“Mr Vahidi was a deputy defence minister and this is very senior political position. Therefore it seems that this is a new trick being planned and is basically a Zionist plot,” he added.

Interpol says it uses “red notices” – or international-wanted persons alerts – to inform its members that an arrest warrant has been issued for an individual by a judicial authorities.

Interpol says that the individuals concerned are wanted by national jurisdictions and Interpol’s role is to assist national police.

It stresses that its notices are not international warrants.