Although there is no reported connection with Islam in this story, it has all the signs of being just that. So I will go out on a limb [a strong limb] and tag it with Islam. 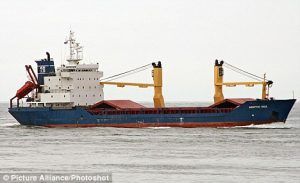 MailOnline…Pirates last night demanded a ransom of almost £1million for the release of the cargo ship which sparked an international search after vanishing from the English Channel a fortnight ago.

Police in Finland confirmed the ransom demand was made to the Finnish owners of the 4,000-ton Arctic Sea and that the case was now being treated as ‘a hijacking with aggravated extortion’.

They said the armed gang had warned they would pose a ‘threat to the life and health’ to the 15 Russian crewmen on board unless their demands are met.

The ransom demand came as The Mail on Sunday established radiation tests were carried out at the port of Pietarsaari in western Finland, where the Maltese-flagged ship Arctic Sea started its voyage.

The Turkish-built vessel, which was carrying £900,000 worth of timber, is feared to have been stormed by pirates looking for a ‘secret cargo’.

The fact that nuclear tests were conducted will fuel speculation that the ship did have a hidden cargo.

Enquiries by this newspaper have established that no checks were carried out on what was being transported in the hold prior to its departure from Finland on July 23.

And the FSB, the Russian security service, as well as MI5 have been involved in the investigation into the hijacked vessel.

Last night Finnish Detective Chief Superintendent Jan Nyholm said: ‘Yes, it is true that there has been a demand for ransom in cash and that it was made to the company which owns the ship, Solchart Management in Finland.’

Another police spokesman, Markku Ranta-Aho, said the ransom demand was for less than $1.5million (£900,000) – that it was ‘significant, but not huge’.

Finnish police also suggested the armed gang demanding the ransom were the same bandits who boarded the vessel off Sweden on July 24 – although other sources claimed it was a different group.

The police released the information after a news blackout during which they had tried to trace the ship, but did not say when the ransom demand was made. They said the hijackers had not been in touch with them.

It is the first time in modern maritime history that a ship has disappeared without trace in European shipping waters.

Until now, ship hijackings have been confined to Somali pirates seizing vessels off the coasts of Africa and in the Indian Ocean.

Yesterday there were reports that the Arctic Sea’s automatic identification system – which helps locate its whereabouts – briefly emitted a signal from the Bay of Biscay,
300 miles west of La Rochelle on France’s east coast.

But 24 hours earlier, there was another report that the ship had been seen 520 miles off the Cape Verde islands off the western coast of Africa –  more than 3,000 miles from its last known location.

Neither of the claims has been officially confirmed.

Ownership of the Arctic Sea is hidden behind a complex web of companies in Malta and Finland.

Its owners – thought to be three Finnish-based Russian businessmen – only filed unaudited accounts earlier this month after initial news emerged of the vessel’s hijacking.

Last night, one of them expressed concern over the safe return of the £12 million ship and its crew.

Director Viktor Matveyev said: ‘I don’t sleep. I don’t eat. I have been working 24 hours a day. We hope that the crew is alive.’

Meanwhile, the British coastguard who was the last official to be in contact with the Arctic Sea has been banned from speaking publicly about the incident at the request of intelligence chiefs.

A spokesman for the Marine and Coastguard Agency said that Sue King was unable to comment following a demand by the security services.

The Arctic Sea began its voyage after a summer refit in the Russian port of Kaliningrad, which is infamous for smuggling.

Rival gangs compete for the lucrative export of contraband cigarettes to Britain and last year Russia’s border services dubbed the port as the nation’s ‘most problematic’ area for smuggling.

After leaving Kaliningrad on July 17, the Arctic Sea sailed to Pietarsaari in Finland, leaving there on July 23. Off the Swedish island of Oland the next day, it was apparently boarded by ten masked, armed men posing as anti-drug police.

They attacked the crew and rummaged through the cargo before reportedly leaving 12 hours later.

Wives of the crewmen received identical text messages from their husbands after the ship was boarded saying: ‘We love you, miss you and we’re sticking to our course.’

This has raised suspicions that the messages were sent by the gangsters on board, because since then there has been no further contact from the crew.

On July 28, the ship passed through the English Channel and disappeared 50 miles south-west of Penzance in Cornwall.

It was due to deliver its cargo of 6,500 tons of timber on August 4 to the small Algerian port of Bejaia.

But last night, the Arctic Sea and its crew were at sea, their position unknown, and at the mercy of pirates intent on making a huge bounty for their release.