According to an eyewitness, the owner was seen removing an old calendar with verses from the Qur‘an and that was sufficient for workers to kill him and two other men. The enraged mob also assaulted management employees and set the factory on fire. Pakistani Prime Minister Gilani travels to Gojra today to express solidarity to Christian victims of the previous massacre. 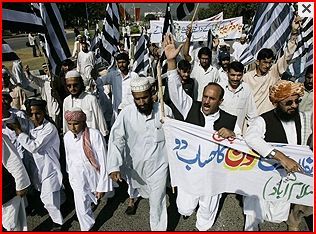 Lahore (AsiaNews/Agencies) – A factory owner and two other men were killed when workers from his plant attacked them along the Muridke-Sheikhupura Road, not far from Lahore, for allegedly desecrating the holy Qur’an, a private TV channel reported on Tuesday. However, another TV station said the owner, identified only as Najeebullah, and the two other men were killed over the factory administration’s failure to pay workers.

The incident began when a worker came into the factory at around 2 pm and saw that the owner had taken down an old calendar, which had verses from the holy Qur’an written on it, and put it on a table. The worker accused the owner for what he thought was “desecration” of the holy Qur‘an. When a guard tried to stop him, he ran out into the working area and started gathering his colleagues, claiming the owner had committed ‘blasphemy’.

When the group of workers surrounded Najeebullah, his guard tried to protect him by firing in the air, but this further enraged the crowd; shots were fired killing the owner and his guard.

In their rage workers attacked the factory administration, beat up several employees and set the plant on fire.

Police rushed to the site to bring the situation under control, but the angry mob turned on them and seized their weapons.

This incident follows a similar one in Gojra (Punjab) where a group of Christians was burnt alive just a few days ago for alleged blasphemy.

Today Pakistani Prime Minister Yousuf Raza Gilani visited the Punjabi town to express solidarity with the Christian community and reiterated his condemnation of the outrage which is currently under investigation.