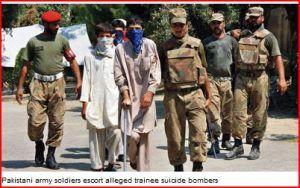 SKY NEWS… Boys brainwashed into becoming suicide bombers have been rescued by Pakistani forces fighting Taliban militants in the Swat Valley region, according to officials.

An army commander in Swat spoke of more being handed over by their families.

“They have been brainwashed in such a way that they even call their parents infidels,” Bashir Bilour, senior minister in the provincial government said.

Mr Bilour said the boys were shown films about oppression of Muslims in the Palestinian territories and Indian-held Kashmir.

They were also given purported religious instructions to convince them that they would go to heaven if they killed enemies of Islam, he added.

Brigadier Tahir Hameed, an officer leading military operations in Mingora, Swat’s main town, said the Taliban had forced many families to let them take their boys.

He said some had since returned to their parents, who in turn handed them over to the authorities because of their brainwashed state.

The government was working out how to rehabilitate the boys, aged between nine and 18.

The Taliban has regularly claimed responsibility for suicide attacks carried out by boys both in Pakistan and Afghanistan.

Pakistani security forces have shown Western journalists locations where children were said to have been trained, although there was no independent corroboration available.

On Tuesday, a suicide bomber rammed his car into a security checkpoint north of Miranshah in North Waziristan’s tribal region, killing one paramilitary soldier and wounding two, officials said.

The military launched an offensive almost three months ago against the Taliban stronghold after the militants crept into the neighbouring valley of Buner, 60 miles north west of capital Islamabad.

Around 20,000 troops have been deployed in the Swat operation, and in the last two weeks hundreds of thousands of people who had fled the fighting have begun to go home.

But the guerrillas were still putting up resistance in the north of the Swat Valley, and even the outskirts of Mingora remained insecure.