Just say the magic words and take away water and hey presto! You are a Muslim!

This would just be funny if they didnt kill people who converted away from the religion of peace. If I had an 11 year old son who came home and told me he converted to Islam by saying a few foreign phrases at a conversion booth on Bloor st. I would just laugh it off as if he had told me he had become a Martian by reciting the words: “I am a Martian Martian Martian yes am I” in Hienlienistani. It would mean nothing. He hasnt converted anything even as serious as imperial to metric. The issue is the idiots who believe he would have, and would threaten to, or would kill him for reverting back to his Christian or athiest or whatver he thought of himself as.

I found this video at a Danish site thanks to GOV.

Here is the Mail UK’s take on it:

This is the shocking picture of a young, white schoolboy being converted to Islam by a cleric linked to a radical Muslim hate preacher.

The bewildered 11-year-old, who gives his name as Sean was filmed repeating Arabic chants and swearing allegiance to Allah.

The boy is prompted throughout by controversial cleric Anjem Choudary, a follower of exiled hate-preacher Omar Bakri Mohammed. 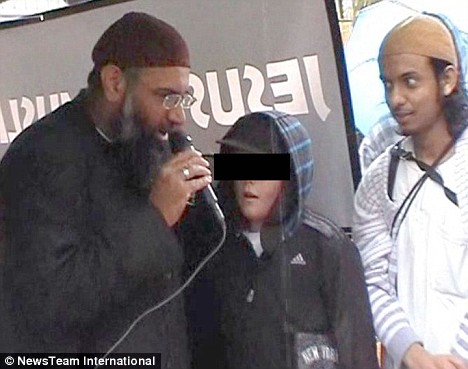 Choudary, 42, was one of the masterminds behind the protests at the homecoming parade of heroic British soldiers in Luton earlier this year.

He praised protesters who branded British troops ‘murderers’ and later appeared at a press conference flanked by thugs who took part in the demo.

Choudary defended the young boy’s ‘reversion’ to Islam but admitted his parents were not with him and were not consulted.

He said: ‘The child was genuinely interested in Islam.’

‘The boy told us he wanted to become a Muslim and, of course, some people are intellectually more mature than they are physically. I don’t see there is any harm in this. 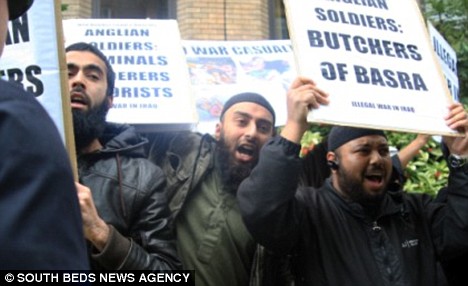 Protest of hate: A crowd of fanatics shouted insults at British troops on a homecoming parade in Luton in March.
‘He was with his friends, but I didn’t see if his parents were there,’ he added.

A message on Choudary’s website offers advice for those who become Muslim at his Islamic Roadshow.

‘Conversion packs are already provided to those who revert to Islam in the Islamic Roadshows,’ it says.

‘They include a booklet on ‘Everything a Muslim must know’ and a free DVD with a brief guide on how to pray in Islam.’

Al-Muhajiroun, which has recruited hundreds of fanatics in the Midlands, fell apart in 2004 just months before Bakri was stopped from coming back to the UK under terror laws.

It has been revealed that the sect is planning to reform.

Bakri has now set his sights set on a return for the extremist group, though the Home Office is understood to be closely monitoring its activities.

Here is Eeyore for Vlad’s take on it:

ANYONE who would trick an 11 year old into changing religions into one where he could easily be murdered for changing his mind when he is older and smarter, like that evening by dinner, is a douche bag for a pit bull. This means you Anjem Choudary but not just you. Anyone like you. A pit bull’s douche.