There is no geopolitical advantage in this. This attack was not in any way to advance a cause other than one of merely killing non muslims and advancing Islam in India. Of all the outrages and horrors perpetrated by Muslims on a daily basis this is the worst of today. So far. From Google news by way of TROP: 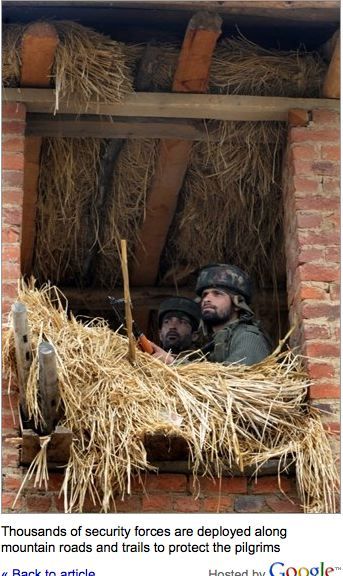 SRINAGAR, India (AFP) — The Indian army said Monday it had defused a bomb placed along a route used by Hindus taking part in an annual pilgrimage to a mountain shrine in Muslim-majority Kashmir.

“The IED was concealed in a bag lying on the side of the mountainous road,” an army officer said. “The timely detection avoided a possible catastrophe.”

The road is used every day by thousands of Hindus from across India and the world to reach a Himalayan cave to a sacred ice form.

The icicle resembles a fertility symbol known as a lingam and is worshipped as a representation of Lord Shiva, the Hindu god of destruction.

Thousands of security forces are deployed along mountain roads and trails to protect the pilgrims, who have been targeted in the past by Islamic militants fighting New Delhi’s rule in Muslim-majority Kashmir.

At least 32 pilgrims were killed in attacks by suspected militants in 2000 and ten more died the following year. Attacks have since dropped, amid a peace process between India and Pakistan.