Vlad has been blogging on ‘The Starbucks Jihad’ for some time now. Maybe one of the first blogs to do so. More evidence from New York today…

Hat tip Gay and Right many thanks

A bomb blast outside a Starbucks coffee shop rattled the early morning Memorial Day quiet of Manhattan’s Upper East Side today, shattering windows and triggering the evacuation of 25 apartments. 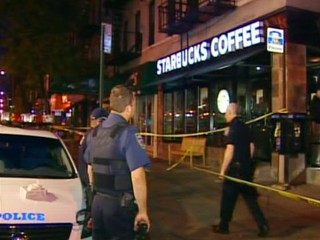 The coffee shop was closed when the bomb erupted at 3:25 a.m., and there were no reported injuries.

New York City Police Commissioner Raymond Kelly said the first officers on the scene “found windows blown out of the Starbucks and the chair, the seat that is right outside, shattered.” The time of day echoed that of a pattern of unsolved early morning blasts that have occurred outside the British Consulate, the Mexican Consulate and the Armed Forces recruiting booth in Times Square over the past two years.

———————–
Below thanks to Islam in Action, a NY Muslim attempts to convince people that a ‘massacre’ which in fact never happened in Jenin, is the fault of Starbucks. Go to the link for more on the Starbucks Jihad.

One Reply to “More on the Starbucks Jihad: Manhattan Starbucks hit by bomb blast”