Just in case anyone thinks this rape case is an isolated exception and not actual Islamic policy by Imams to create terrorists you may want to read this Phyllis Chesler piece on the making of a terrorist. Also, previous articles on Vlad where an Iraqi woman was captured who recruited women, sent them to rape camps where they then became suicide bombers in Iraq.

Oh yeah and how rape of males is used to create terrorists: 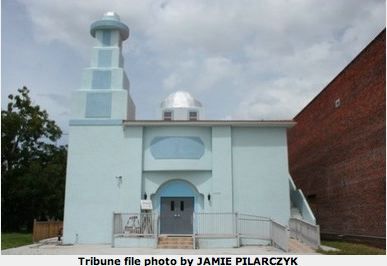 By JOSH POLTILOVE | The Tampa Tribune

The victim was staying overnight at the mosque at 1307 W. North B St. waiting for early morning prayer, an arrest report states.

Yasser Mohamed Shahade, a prayer leader who had been in the country for about two months and had been staying at the mosque, sexually battered the victim about 6 a.m., police say. Police were called about noon Sunday, and they responded to Tampa General Hospital, where the call came from, police spokeswoman Andrea Davis said. Police aren’t releasing the name or details about the person who made the call, and details about the boy’s condition aren’t immediately available.

After responding to the hospital, Davis said, police went to the mosque. Shahade was arrested about 5:30 p.m. Shahade remains in Orient Road Jail. His bail has not been set.

The 2,400-square-foot mosque, Masjid Omar Al Mukhtar, opened within the past year. It has a worship area upstairs that can hold 50 women and an open room below where the mosque’s 130 male members worship.

Details were unavailable about who else had stayed overnight at the mosque, Davis said.

Former mosque board member Yusuf Strohmier said he was surprised after being told by a reporter of the arrest.

“If he did it — which is a key there, because you have to have witnesses — that’s just sick,” he said. “That is a sick thing to do.”

Gary Dicus, who owns a building next to the mosque, also was shocked by the charge against Shahade.

“It’s disturbing as the dickens,” he said.

Alaa Attia, a trustee of the mosque, said that if the accusation is true, it would go against the teachings of Islam.

Ramzy Kilic, executive director of the Tampa Council on American Islamic Relations, agreed. If true, he said, “The full justice of the law should be brought to this person.”

Stay with TBO.com for updates.

Reporter Jamie Pilarczyk and researcher Stephanie Pincus contributed to this report. Reporter Josh Poltilove can be reached at (813) 259-7691.