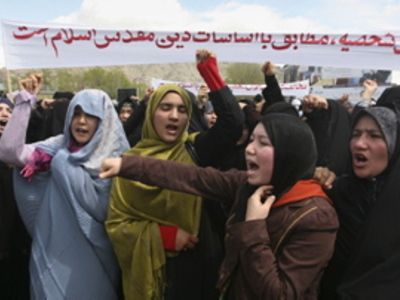 KABUL – Dozens of young women braved crowds of bearded men screaming “dogs!” on Wednesday to protest an Afghan law that lets husbands demand sex from their wives. Some of the men picked up small stones and pelted the women.

“Slaves of the Christians!” chanted the 800 or so counter-demonstrators, a mix of men and women. A line of female police officers locked hands to keep the groups apart.

The warring protests highlight the explosive nature of the women’s rights debate in Afghanistan. Both sides are girding for battle over the legislation, which has sparked an international uproar since being quietly signed into law last month.

The law says a husband can demand sex with his wife every four days, unless she is ill or would be harmed by intercourse. It also regulates when and for what reasons a wife may leave her home without a male escort.
Though the law would apply only to the country’s Shiites, who make up less than 20 per cent of Afghanistan’s 30 million people, many fear its passage marks a return to Taliban-style oppression of women. The Taliban, who ruled Afghanistan from 1996-2001, required women to wear all-covering burkas and banned them from leaving home unless accompanied by a male relative.

Governments and rights groups around the world, including Canada, have condemned the legislation, and U.S. President Barack Obama has labelled it “abhorrent.” Afghan President Hamid Karzai has remanded the law to the Justice Department for review and put enforcement on hold.

A host of Afghan intellectuals, politicians and even a number of cabinet ministers have come out against the law. But those who decry the legislation face quick criticism from conservative Muslim clerics and their followers, as Wednesday’s protests showed.

“You are a dog! You are not a Shiite woman!” one man shouted to a young woman in a head scarf.

The woman, who held a banner reading “We don’t want Taliban law,” replied quietly: “This is my land and my people.”

The demonstrators chose a risky spot to hold their protest – in front of the mosque of the legislation’s main backer – and were easily outnumbered by supporters of the law. They said many women had been stopped on their way to the protest.

In the end, more women demonstrated in favour of the law than against it, with a few hundred Shiite women marching with banners to join the angry men. They blamed foreigners for inciting the protests.

“We don’t want foreigners interfering in our lives. They are the enemy of Afghanistan,” said Mariam Sajadi, 24.

Sajadi is engaged to be married, and said she plans to ask her husband’s permission to leave the house as put forth in the law. She said other articles – such as the one allowing husbands to demand sex – have been misinterpreted by westerners prejudiced against Islam. She did not elaborate.

On the other side of the shouting, Mehri Rezai, 32, urged her countrymen to reject the law.

“This law treats women as if we were sheep,” she said.

Both sides say they are defending their constitutional rights but Afghanistan’s constitution is unclear. It defers to Islamic law as the highest authority, but also guarantees equal rights for women.

Abbas Noyan, a Shiite legislator who opposes the law, said he is hopeful it will be changed. But others are less sure, and even the country’s minister of women’s affairs, who is female, has declined to comment on the law.

New York-based Human Rights Watch maintains that the judicial review ordered by Karzai is unlikely to be truly independent because those leading the process come from a conservative Shiite background.