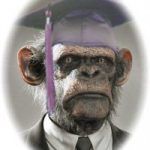 The Muslim custom of sueing those who disagree with what they say or do continues even when it comes to science. Or at least the Islamic version of science.

from The Wall Street Journal

An Islamic Creationist Stirs a New Kind of Darwinian Struggle

Also weighing in on his side are very aggressive lawyers. They’ve repeatedly gone to court in Turkey to silence critics whom Mr. Oktar accuses of spreading “lies and insults.” Scores of Web sites have been banned at his behest.

ISTANBUL — As scientists around the world celebrate the 150th anniversary of Charles Darwin’s seminal work on evolution, Adnan Oktar, a college dropout turned theorist of Islamic creationism, is working on the fifth volume of a 14-part masterwork that he says will bury Darwinism once and for all.

“Darwin and his theory are dead,” says Mr. Oktar, founder and honorary president of the Science Research Foundation, an Istanbul outfit dedicated to debunking the Victorian-era English naturalist. Darwin, says his 52-year-old Turkish scourge, is “Satan’s biggest trick on humanity.”

Mr. Oktar, who briefly studied interior design, hasn’t had much success swaying scientists with the weight of his research. “He is a complete and utter ignoramus,” says Richard Dawkins, an evolutionary biologist and Oxford University professor.

The physical weight of Mr. Oktar’s work, however, is considerable. Each volume of his anti-Darwin magnum opus, “Atlas of Creation,” weighs more than 13 pounds. Also weighing in on his side are very aggressive lawyers. They’ve repeatedly gone to court in Turkey to silence critics whom Mr. Oktar accuses of spreading “lies and insults.” Scores of Web sites have been banned at his behest.

These include the site of Oxford’s Prof. Dawkins, which Mr. Oktar — who writes under the pen name Harun Yahya — got blocked last fall after it posted an article entitled “Venomous Snakes, Slippery Eels and Harun Yahya.” Prof. Dawkins responded to the ban by posting a Turkish translation of the article. Mr. Oktar derides Prof. Dawkins, an outspoken atheist, as “a pagan monk.”

Mr. Oktar’s combative zeal has put him in the vanguard of what some secular-minded Turks lament as a dangerous phenomenon: a retreat from science into religious dogma. “We are trying to turn the trend back, but I’m not sure we’ll be successful,” says Aykut Kence, a biology professor at Ankara’s Middle East Technical University.

Prof. Kence has worked with like-minded scholars on a series of conferences and other events marking Darwin’s birth 200 years ago and the publication, in 1859, of “On the Origin of Species.” He last week joined a chorus of secular outrage over a decision by the official journal of Turkey’s state scientific-research council to pull a planned cover story on Darwin.

A recent survey found that only a quarter of students entering Turkish universities accept Darwin’s theory of evolution and that the proportion is much the same when they graduate. The findings, says Prof. Kence, are “very depressing.”

Islam, like Christianity, holds that God created the world and its creatures. But the Quran leaves more room for acceptance of evolution than does the Old Testament, which states that the world was created in six days. Creationism, says Prof. Kence, was originally a “Christian import,” but has gained traction among Muslims, thanks in part to Mr. Oktar.

Mr. Oktar’s message has won support in some unlikely quarters, most notably among educated, wealthy Turks from secular families. Emre Calikoglu, a businessman in the construction industry, says he was “not interested in religious things before” he met Mr. Oktar but is now a devoted believer.

His construction firm has been hit hard by the economic crisis, but he welcomes predictions by Mr. Oktar that capitalism will soon be replaced by a new, greed-free system. In his spare time, Mr. Calikoglu works for Global Publishing, the publisher of Mr. Oktar’s “Atlas of Creation.” It has translated Mr. Oktar’s works into 57 languages, including Swahili and Albanian.

Mr. Oktar’s urbane and often multilingual fans serve as missionaries abroad. At a Vatican-sponsored conference on evolution earlier this month in Rome, a Turk who introduced himself as a brain surgeon took the floor to expound — in fluent English — on Mr. Oktar’s views on fossils. Organizers snatched away the microphone.

How Mr. Oktar funds his global campaign is a mystery. He says only that he has various “commercial activities” and many businessmen friends. “My friends are usually rich people.”

Over the years, Mr. Oktar has also gathered many foes.

“He’s a megalomaniac. He worships the mirror,” says Edip Yuksel, a Turkish writer who got to know Mr. Oktar in the 1980s when he first began developing his idiosyncratic take on Islam. Now a bitter critic, Mr. Yuksel has written a Turkish-language book on Mr. Oktar — “The Cult of the Antichrist” — but says he hasn’t found a publisher willing to brave Mr. Oktar’s lawyers. His Web site is banned in Turkey.

The 1980s were a period of political turmoil and also Islamic awakening in Turkey. A military coup at the start of the decade led to the arrest of many left-wingers but left Muslim activists mostly unscathed. Under their influence, the Ministry of Education in 1984 revised textbooks to include creationism alongside Darwinism.

In 1986, Mr. Oktar published his first book, “Freemasonry and Judaism,” a tirade against the perils of atheism. He then spent 10 months in a mental hospital. Mr. Oktar says he was never mentally ill but was institutionalized to stifle his views. Military doctors later declared him mentally sound, he says, but he complains that Turkish media “propagated the idea that I was a lunatic.”

Mr. Oktar has had various brushes with the law, including a 1991 drug-possession case in which, he says, security agents planted cocaine in his food. He was acquitted. A glamorous model then accused him of blackmail. The case collapsed. Mr. Oktar is now fighting to reverse a conviction last year of himself and six others for forming an unnamed illegal organization that Mr. Oktar says does not exist.

“I have a great number of enemies,” says Mr. Oktar, who blames his troubles on a “Darwinist dictatorship.”

Unlike strict Christian creationists, who assert the world was created in six days around 10,000 years ago, Mr. Oktar allows for a far longer time period stretching back billions of years. But he agrees with those Christians who insist life didn’t evolve, asserting that animals and plants now are exactly as they were at the dawn of time.

His “Atlas of Creation” produces thousands of pictures of fossils of birds, snakes and other creatures side by side with what he says are their identical modern kin. Prof. Dawkins derides the exercise as “total inanity” and says Mr. Oktar confuses snakes with eels and makes other elementary blunders.

One of the pictures in the first volume of Mr. Oktar’s work features what is labeled as a caddis fly. It is in fact a man-made fishing fly with a metal hook clearly visible. Mr. Oktar says this is a “little detail” and believes that “just 10 pages of my book can defeat Dawkins.”

He’s offered a reward of 10 million Turkish lira (around $6 million) to anyone who can produce a fossil that proves evolution. He has also invited his Oxford foe to a debate.