This is an extraordinary video sent to me by the excellent blog Point Du Bascule. Here we see an indigenous French man robbed then mugged and called Filthy Frenchman on a French public transit system by Muslims. In fact this is clear anti white racism by immigrants. This video was pulled from youtube several times already. Must be seen.

***The young police officer who posted the video on Facebook (to show his friends the difficult conditions in which they have to work) has been suspended. He will soon appear before a disciplinary board. Those commenting are sympathetic to the young police officer, saying the scandal is in the fact that authorities did nothing until it was posted on the internet and spread wildly.***

The video embedded from RUtube is in such demand its buffering and hard to watch. This should run smoothly:

This is the video the French authorities don’t want you to see. An unprovoked attack on a young passenger on a Paris night bus by a gang of savages, likely from one of the dangerous banlieue around the capital.

Passengers who tried to intervene were themselves attacked.
Warning: It is disturbingly violent.
The assault was recorded by bus CCTV. A policeman posted the video on a Facebook site: He has been arrested and suspended from his post. The authorities fear the video is being used by right-wing sites to stir up fear about racist violence by black and arab youths against French citizens.
French authorities have been demanding the removal of the video from blogs and video hosting services.
The President of the Paris transport authority RATP has described the video as “a crime in which the RATP is the victim: Unbelievable. The same transport President Pierre Mongin described the bus driver’s conduct as “exemplary.”
The delegate for Sud-RATP, the hardline union for Paris transport workers, said that the violence was unexceptional for late-night services. What is exceptional, he added, was for the public to see the images. “Who broadcast this video on the internet?” he demanded, “the victims, the aggressors, the driver and the other passengers did not choose to be put in the public eye in this way. It’s unacceptable.”
According to the union, extreme violence is unexceptional; invading the privacy of the aggressors, however, goes beyond the pale.
At one point in the video, the victim is called “sale français”, “dirty French.” The same insult was used by casseurs who mobbed student protests two years ago, mugging and assaulting youngsters taking part in demonstrations against the government.
Charles Bremner writes in the Times that attacks like this are becoming increasingly frequent: night bus drivers warn that if you can’t get a taxi after a nightclub, you are better off waiting until morning rather than risk public transport.
Three youths have been arrested following the incident. 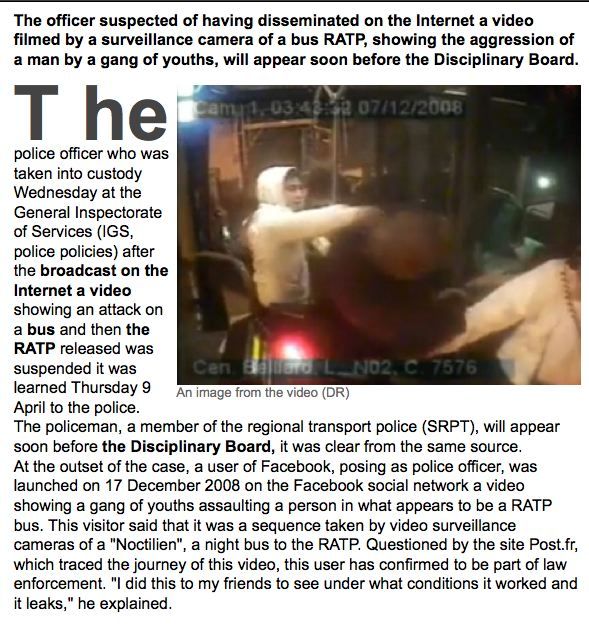 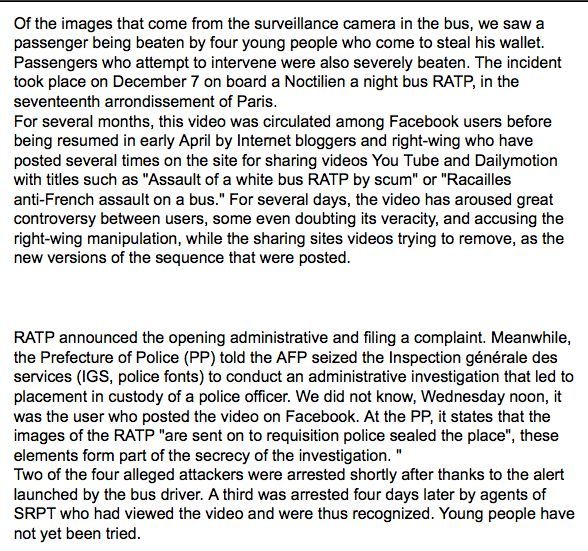 22 Replies to “White French man robbed and beaten in France on public transit.”