Sorry for the slow posts today. Life has gotten in the way of blogging. It happens as rarely as I can manage it. There is no shortage of material though. To begin with, for you conspiracy people, two coincidences took place in the past couple of weeks which I find rather puzzling. Each one may be simply coincidence or not and may be related or not so Ill toss the facts out there and you can decide the extent of their meanings.

1. 2 submarines crashed in the Atlantic ocean. One British one French. Now, I would imagine that subs have some kind of a system to let them know when an obstacle is nearby. Especially a large one and doubly so an object of military interest like oh, another submarine. Yet these 2 collided.

2. A non working Russian satellite crashed into a US communications satellite in low orbit. The odds of that happening are about Obama’s pork bill to one. And these all in a matter of a few days apart. Even if both events are pure coincidence with nothing else to them, they are interesting as they show some serious weakness in Submarine sensors, or maybe giant improvements in submarine anti detection equipment. And boy, those Russians got lucky managing to take out a US com satellite with some likely military application with an old derelict piece of space junk all by itself.

Here is two paragraphs of the Stratfor on the Satellite issue.

An operational Iridium communications satellite and an old Russian communications relay satellite (widely reported as decommissioned) collided Feb. 10 over northern Siberia, destroying both spacecraft. Though details are still emerging, such an incident is extraordinarily unlikely. This unlikelihood itself may help shed light on the event and its implications.

Analysis
Reports of the collision of two satellites in low Earth orbit (LEO) on Feb. 10 hit the world presses the morning of Feb. 12. One of the crafts involved was an operational Iridium Satellite LLC communications satellite (part of the U.S. company’s extensive constellation); the other was an old Russian communications relay satellite that has been widely reported as nonoperational for roughly a decade.

And a blurb on the submarines… 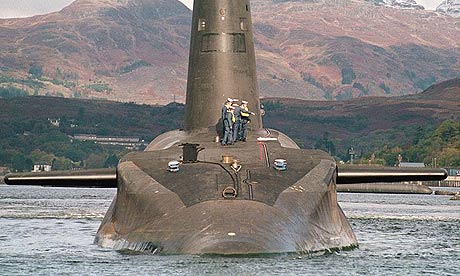 HMS Vanguard before it suffered ‘scrapes’ in a collision with a French submarine. Photograph: Chris Bacon/PA

The Ministry of Defence initially refused to confirm the incident, saying it was not policy to comment on submarine operations. This afternoon the First Sea Lord, Admiral Sir Jonathon Band, issued a statement saying the two vessels hit each other while travelling at very low speeds and no one was injured.

A Royal Navy nuclear submarine and a French vessel have been damaged in a collision deep below the surface of the Atlantic Ocean.

HMS Vanguard and Le Triomphant, which were carrying nuclear missiles on routine patrols, are reported to have collided while submerged on 3 or 4 February. Between them they had about 250 sailors on board.

Read the link for more on this.

Here is a hysterical bit of spin doctoring attempting rather feebly to delink Islam with the behading of the TV station owners wife in Buffalo NY. This appears to have been written by a spin doctor. Its more than just failing to mention it, it feverishly attempts to make the case Islam has nothing to do with it. In fact, it works so hard at it that a certain scene of Hamlet springs to mind around paragraph three…

Contrary to some spurious reporting, this was not an “honour killing”, a barbaric practice that has its own unique motivations and historical culture, rather it personifies the all too common phenomenon of domestic abuse. Asma Firfirey, the sister of the deceased, stated Aasiya suffered last year from injuries that required nearly $3,000 of medical bills – allegedly the result of spousal abuse.

Then again in paragraph five…

Despite his shameful history, Hassan mind-bogglingly remained a prominent and adulated figure in Muslim American circles for his contributions to the media. His example, amongst several others, highlights the egregious failure of foresight and insight of American Muslim leadership to carefully vet, screen and ultimately renounce appointed representatives with reprehensible backgrounds.

“Methinks the woman doth protest to much”

Yeah. Those Nazis really did fail to vet the SS properly when they went off killing all those Jews. It’s shameful how how they continued to laud and applaud those SS guards even though they consistently acted so un-Nazi like. Just because the Nazi holy book specifically advocates this activity and it is a central dogma of the philosophy and actions of Nazism, clearly abusing and killing women often by beheading or throwing acid on their faces, this is unislamic activity. Only in England you say? Pity.

I wonder if it has anything to do with the specific British policy of representing any action by Muslims such as terrorism violence advocating jihad or threatening riots as ‘unislamic activity’.