Here is a series of links to events and essays which I feel are very worthwhile as well as worth the time to read. This being St. Valentine’s its noteworthy that this was a real man in ancient Rome, and he was canonized as a patron St. to lovers. So it suddenly seems quite logical why Islam loathes and despises Valentines day around the world and is acting out in the usual puerile fashion it so often does. Valentines day requires women to be people and have some actual right to their own romantic destiny which is what Valentine represented. Hence the photo below. From Atlas Shrugs:

Roses are red … and unwanted in Saudi Arabia as a Riyadh flower vendor shows how the vice squad crush red roses while enforcing a law banning Valentine’s Day celebrations in the conservative desert kingdom. Islamic law strictly segregates the sexes before marriage, so flowers, chocolates and romantic dinners shared by boyfriend and girlfriend are next to impossible. 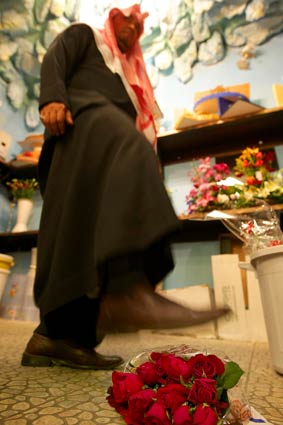 Next, a rather excellent historical essay about Indias harsh and lengthy struggle to survive as a people and a culture under near constant Islamic destruction with numerous quotes by Islamic scholars of the day describing destruction and humiliation of the Hindu’s under various Islamic jihad’s. India knows Islam as an enemy better than anyone. The need for Europe Israel and the west overall to join with India in every way may be central to defeating this, the third Jihad. Remember, the accounts in the above link where written by the Muslim conquerors themselves. Like the Nazis they felt what they did was a great thing and documented it well.

Concerning Australia’s deadly fires, we know four things. 1. There are rumors of jihadi sites suggesting that fires be set to destroy as much as possible as its relatively easy to do in the dry summer of parts of Australia and grandiose 911 style plans haven’t worked well as frankly they get caught. So while this isn’t a very glorious way to wage jihad on the people of Australia who where nice enough to let Muslims in from whatever shit hole nation they came from, it might be an effective one. This is not evidence, but its an interesting coincidence because 2. we do know that the fires are indeed arson. This was made clear. and we also know 3. That a wanted picture of a perp in connection with the fires has been published although no name. We can judge for ourselves what the motive may be and lastly and interestingly 4. we know that Muslims in Australia are gloating about the fires and enjoying the fact like Palestinians on 911 which makes the first three points unimportant. That is to say, even if the fires where not arson, where not set by Muslims as part of Jihad, they are acting as if it was and are gleeful about the misery destruction and death of their adopted countrymen. Repugnant? Doesn’t come close.

Lastly, Pakistan now admits the most recent horrors in Bombay/Mumbai where indeed planned in Pakistan.

Islamabad (AsiaNews/Agencies) – Pakistani interior minister Rehman Malik admitted today, for the first time, that “some part of the conspiracy related to the [November 26] Mumbai attacks was planned in Pakistan.” At least 6 people believed to be involved have been arrested, and 2 more are being sought, but the investigation is ongoing and further developments are not ruled out.

It is said that some of the conspirators could be members of the outlawed extremist group Lashkar-e-Taiba, including Zia-ur-Rehman Lakhvi and Zarrar Shah, who sent “an e-mail claiming responsibility for the attack.” Shah has been in jail since December.

Those under arrest also include Hamad Amin Sadiq, considered the “main architect” of the plot, who arranged the transfer of money used for the attacks, and Javed Iqbal, an expert in internet technology living in Barcelona. The money came from Spain and Italy, and SIM telephone cards from Austria and India were used. Also in jail is the person who sold the boat engine used by the attackers to reach Mumbai by sea.

Happy Valentines everyone! Now is the time to abandon post modern cynicism, find someone you love and cherish freedom. Enjoy some music, a nice pork tenderloin and a really cold beer.