According to MSNBC two men face a death sentance for ‘misinterpreting quoran‘ by writing a pocket size edition of it. I don’t care if they had wonderful intentions by Islamic standards meaning a Koran that’s easier to carry or if they like Salmon Rushdie meant to mock it and raise awareness of what a god awful piece of crap it is (pun intended with apologies) either way how dare western troops be in Afghanistan to support a government that would kill a person for writing something down. This is not the first incident under the Karazai Government. A man was sentenced to death last year as written about here on Vlad for bringing a piece of paper into class questioning whether Islam was in opposition to woman’s rights. This was at a university. Students are supposed to ask questions of their societies. He was sentenced to death and the judges at his ‘trial’ actually where shocked to discover that it was possible to print something off of the internet. This means either printers or the internet will not be legal long in Afghanistan I wager. 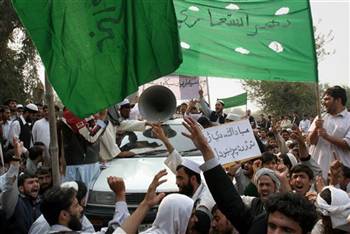 Here is an excerpt from the article…

KABUL – No one knows who brought the book to the mosque, or at least no one dares say.

The pocket-size translation of the Quran has already landed six men in prison in Afghanistan and left two of them begging judges to spare their lives. They’re accused of modifying the Quran and their fate could be decided Sunday in court.

The trial illustrates what critics call the undue influence of hardline clerics in Afghanistan, a major hurdle as the country tries to establish a lawful society amid war and militant violence.

The book appeared among gifts left for the cleric at a major Kabul mosque after Friday prayers in September 2007. It was a translation of the Quran into one of Afghanistan’s languages, with a note giving permission to reprint the text as long as it was distributed for free.

Some of the men of the mosque said the book would be useful to Afghans who didn’t know Arabic, so they took up a collection for printing. The mosque’s cleric asked Ahmad Ghaws Zalmai, a longtime friend, to get the books printed.

But as some of the 1,000 copies made their way to conservative Muslim clerics in Kabul, whispers began, then an outcry.

Many clerics rejected the book because it did not include the original Arabic verses alongside the translation. It’s a particularly sensitive detail for Muslims, who regard the Arabic Quran as words given directly by God. A translation is not considered a Quran itself, and a mistranslation could warp God’s word.

‘Zalmai is an infidel. He should be killed’
The clerics said Zalmai, a stocky 54-year-old spokesman for the attorney general, was trying to anoint himself as a prophet. They said his book was trying to replace the Quran, not offer a simple translation. Translated editions of the Quran abound in Kabul markets, but they include Arabic verses.

“In all the mosques in Afghanistan, all the mullahs said, ‘Zalmai is an infidel. He should be killed,'” Zalmai recounted as he sat outside the chief judge’s chambers waiting for a recent hearing.

Zalmai lost friends quickly. He was condemned by colleagues and even by others involved in the book’s printing. A mob stoned his house one night, said his brother, Mahmood Ghaws.

Police arrested Zalmai as he was fleeing to Pakistan, along with three other men the government says were trying to help him escape. The publisher and the mosque’s cleric, who signed a letter endorsing the book, were also jailed.

I completly fail to understand why nations such as the USA Canada and many other western secular states would fight for a government that continues the Taliban policies at least in spirit if not in the worst of its atrocities against its citizens and free speech. If there is some overriding geopolitical concern please someone post it in the comments. Go to the original site for photos and more on the story.