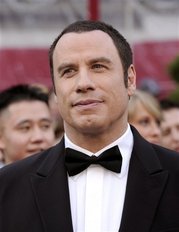 PARIS – A John Travolta movie has suspended plans to film in one of the Paris area’s toughest housing projects after 10 cars to be used in the movie were burned, the production company and local officials said Tuesday.
ADVERTISEMENT

Filming of the action movie “From Paris With Love” has been in progress for around two weeks. The filming set in the project known as Les Bosquets was scheduled to start this week. Around 90 residents were cast in roles as extras.

Cars are regularly burned in French housing projects, most famously during rioting that raged for three weeks in 2005 in poor neighborhoods across the country.

It was not immediately known who was responsible for setting alight the eight cars parked at a local stadium and two nearby early Monday, said Timm Rigal, aide to Mayor Xavier Lemoine of Montfermeil, where the housing project is located.

The Europacorp production company refused to confirm the mayor’s claim that the project scenes were being definitively canceled.

A production official said Europacorp chief Luc Besson, the French director, writer and producer, was reviewing the situation. The official was not authorized to speak publicly on the matter and asked not to be named.

The filming of the English-language movie, directed by Pierre Morel and also starring Jonathan Rhys Meyers, continues with indoor scenes programmed this week, according to the production official.