this is a perfect example of why Hell’s angels is so popular in Denmark. It will not take long if it isnt occuring already that Britain’s total failure to protect and represent indigenous Britain’s interests will result in the worst possible outcome short of Sharia law, open and random civil war between Muslims and everyone else. From Dailymail.uk

Merchants of Hatred: On the anniversary of 9/11 this terrifying investigation reveals the hatred of Britain’s enemies within 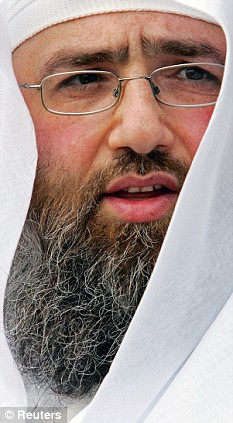 Their message was as disturbing as ever – and the date, September 11, was particularly symbolic.

On Thursday evening this week, at a packed meeting in London’s East End, two profoundly dangerous men urged the destruction of the British way of life.

I was there as the radical cleric and self-styled sheikh Omar Bakri Mohammed proclaimed that this country – where he received state benefits for two decades – will soon be transformed into an Islamic state, or Khilafah, run according to the rules of the Muslim holy book, the Koran.

‘In the streets of London – Whitechapel, Bethnal Green, Stratford – people are becoming Muslim in their droves. By sheer numbers, Britain will become an Islamic state.

‘We will never need to conquer this country. Our eyes are now on Downing Street,’ he added, with an excited laugh.

Alarmingly, at the three-hour conference called to mark the seventh anniversary of the 9/11 atrocities, there were shouts of support from the 100-strong audience of men (some only boys in their teens) and women.

At first sight, the meeting in an upstairs room next to the Walthamstow Mosque on Northumberland Street, Leyton, seemed harmless.

Between speeches from the robed clerics at the front, there were breaks for prayers and a meal of chicken curry and dates.

Children played on the floor and veiled mothers held babies.

But what was being said has deep implications for the future of this country. 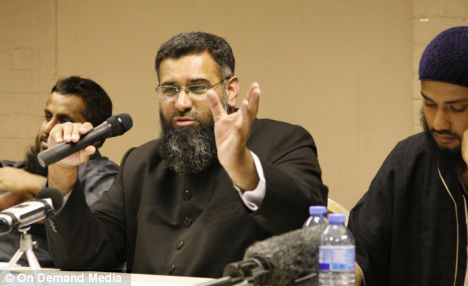 Anjem Choudary, centre, is Bakri’s right-hand man and a leader of islam4UK

While 59-year-old Omar Bakri did not appear in person, his words were broadcast via computer link from 2,000 miles away in Lebanon, where he has lived since being banned from Britain.

He was exiled after financing British Muslim youths at militant jihad training camps here and abroad, and praising the London 7/7 bombers, who killed 52 people in 2005, as ‘the fantastic four’.

The then Home Secretary, Charles Clarke, declared that Bakri’s presence – he was living on welfare benefits in a rented house in Edmonton, North London, with his wife and large family – was ‘not conducive to the public good’.

Bakri’s citizenship was removed while he was visiting his mother in the Middle East, and he was told not to return.

But distance has done nothing to diminish the danger he still poses to this country. 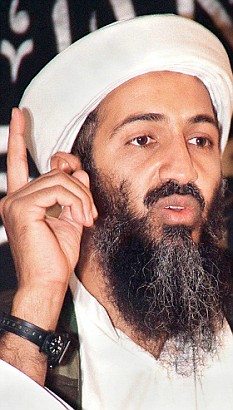 The meeting was told Osama Bin Laden had taught the US a ‘lesson’, and the next 9/11 could take place in Britain

Thursday night’s meeting was told that Osama Bin Laden had taught the Americans a ‘lesson’ seven years ago but the ‘crusaders’ had not learned and the next ‘9/11 will take place in Britain, the next 7/7 (London bombings) could take place locally’.

Choudary and Bakri go back a long way. In the 1990s they were founder members of a now disbanded radical Islamic sect called Al-Mahijaroun.

It was banned in many countries, but notably not Britain.

Choudary, a solicitor and the graduate son of a Pakistani market trader in London, became chairman of the Society of Muslim Lawyers, before ending his career and embarking on an extremist campaign.

He has leafleted mosques and uses the internet to spread his message of hate.

He has described the 9/11 hijackers as the magnificent martyrs, and said the Pope should be murdered for criticising aspects of Islamic extremism.

Yet still nothing has been done to silence him.

The problem doesn’t end with Bakri and Choudray. Last week, the Mail revealed that their fellow preacher of hate, Abu Qatada (Osama Bin Ladin’s right-hand man in Europe), has been associating with proven terrorist Yasser Al-Sirri.

And this despite being the subject of strict bail conditions following his release from Long Lartin high-security jail after the Government failed to have him deported to Jordan, where he is wanted for terrorism offences.

Abu Qatada has been described by the Special Immigration Appeals Commission as a ‘truly dangerous individual’ and ‘at the centre’ of terrorist activities associated with Al Qaeda. 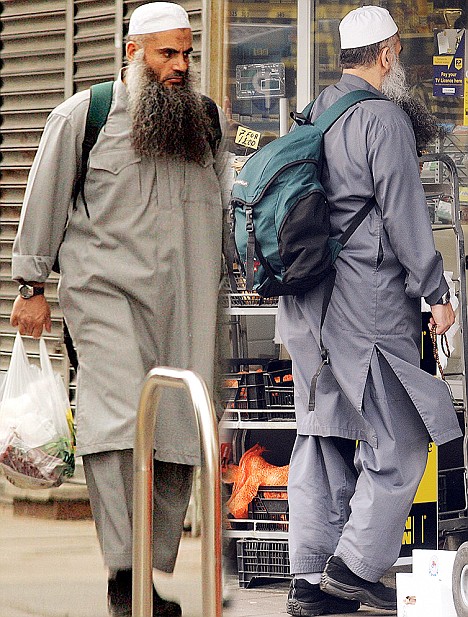 We published a photograph of the 47-year-old in North London walking with fanatical Islamist Al-Sirri.

Incredibly, Al-Sirri, who was convicted in Egypt and sentenced to death in absentia for his part in a 1993 car bomb attack, is also living in Britain.

Both men survive on state hand-outs and have a record of peddling Islamic extremism.

But that is not all.

Earlier this month, the Mail was passed details about another meeting organised by Choudary’s islam4UK.

The event was billed as ‘Khilafah for Britain – the Divine Alternative’, and invitations were handed to the public by Islamic groups near London’s Oxford Street.

Posters plastered on windows and lamp-posts also gave the date and time of the meeting at International Students’ House, Great Portland Street. 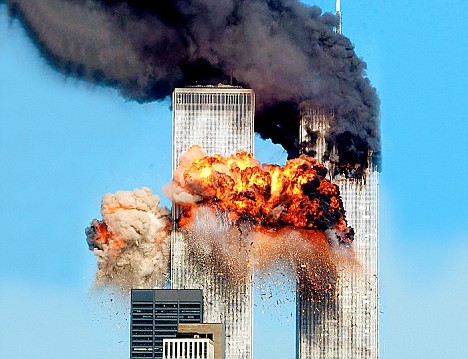 Hijacked United Airlines Flight 175 from Boston crashes into the south tower of the World Trade Center and explodes at 9.03am on September 11, 2001

The invitations were printed on a small 4in x 6in blue postcard illustrated with a map of Britain. Chillingly, a black flag was flying over the country with the word ‘Khilafah’ written on it.

Beside the flag was a list of Britons who islam4UK say have lent succour to wild ideas of an Islamic United Kingdom.

They include the Archbishop of Canterbury Dr Rowan Williams and the Lord Chief Justice Lord Phillips (both of whom have said Islamic shariah laws have a place in modern, multi-cultural British society).

A week ago, the respected Channel 4 Dispatches programme revealed that it is not only in secretive meeting rooms that the message of radical Islam is being peddled.

At Regent’s Park Mosque, sermons of hate against women, homosexuals, Muslim converts to other faiths, and adulterers are being made daily – even by female preachers. 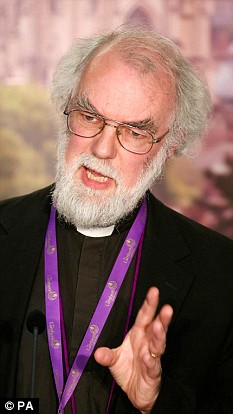 The mosque has been visited by several Labour ministers and is constantly cited as a model of moderation and religious tolerance.

And yet the Channel 4 footage showed that worshippers – including babies, children and teenagers – are being told they must lead separate lives from non-Muslims, and not befriend those from other religions.

And in the mosque shop, there were books and DVDs promoting extremist, anti- Semitic and misogynistic messages of hate against other faiths.

Unbelievers were described in one DVD as ‘wicked, mischievous people – you can see the evil in their face’, while Jews were said to ‘have a filthy, disgusting gross belief – their time will come like every other evil person’s time will come.’

In one particularly repulsive DVD, a preacher is recorded declaring that the strictest rules of Islam’s Shariah law should be enforced around the world, including in Britain.

People should watch the decapitated heads of adulterers rolling in the streets, he says, and see thieves with their hands cut off.

‘They see that, and it acts as a deterrent,’ he declares, shaking his bearded head at the camera.

Another clip shows a preacher collapsing in hysteria as he rants about the evils of Christians, Jews and non-Muslims.

His voice goes from deep to high, and then he begins to cry.

Meanwhile, a woman preacher (in the strictly sexually segregated section of the mosque) tells female worshippers they should not go outside without a male relative, refuse jobs which involve working alongside men, and should never show so much as a sliver of their wrists in public.

The nature of some of these activities – and those in Islamic centres across Britain – seems, however, to have passed the New Labour government by.

As part of this initiative-200 different organisations from 70 parts of Britain with large Muslim populations have received millions in public grants under what is officially called the Preventing Extremism Pathfinder Fund – a total of £15million a year. 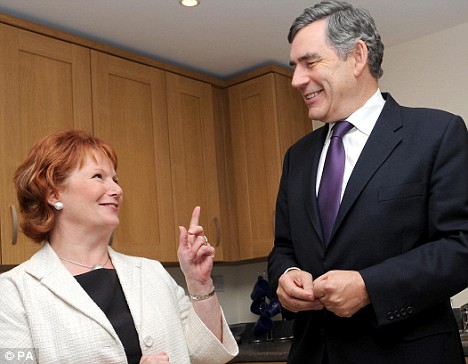 The official blurb accompanying the fund, published on a Whitehall website, says the money will help Muslim women become role models, ambassadors for Islam, and unlock their potential.

In Oldham, £20,000 has been given to help imams speak English. In Birmingham, where £3million has been granted, local councils have spent thousands on producing T- shirts proclaiming ‘I love Islam’.

As one community worker in the Midlands told the Mail this week: ‘All too often, organisations are given a lump sum without the proper questions being asked or investigations made.

‘Instructions on the Islamic websites tell how to successfully claim pathfinder grants, what to say in the application, the buzzwords and that kind of thing.

‘It is really no different to cheating in your exams by taking your answers off the web.’

And what of Bakri and Choudary?

Admittedly they no longer openly call for terrorist acts – although Choudary told the meeting in London on Thursday (called 9/11: Have The Lessons Been Learnt?) that the majority of the world’s Muslim youths say they love Al Qaeda and Osama bin Laden, and that there will be a 9/11 in Britain if the West doesn’t withdraw troops from Iraq and Afghanistan. 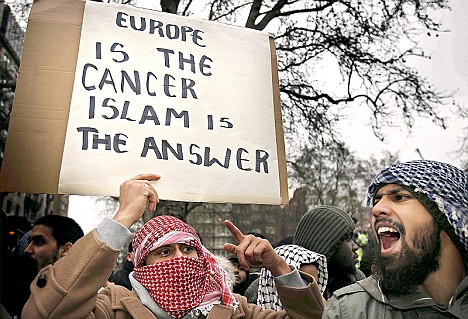 The truth is that these radical preachers want nothing less than an Islamic takeover of Britain – including our education and legal systems.

And they say that by sheer force of numbers, this will happen.

As Choudary observed to murmurs of approval from those at the meeting: ‘What have the British given us? Gambling, pornography, adultery, fornication, exploitation. How much better this country would be under Shariah law.’

And Bakri, the mastermind behind this extemism? The Syrian-born radical came here as an asylum seeker in the Eighties, married a Lebanese woman and had six children.

When I rang him in exile in Lebanon, he revealed that he had now divorced his wife in Britain and married again. ‘I have a new one and young family here. My work goes on,’ adding, without shame: ‘I still praise the magnificent martyrs of 9/11 and the glorious raiders of the London bombings.’

Bakri, earlier this month, claimed that the British secret services have been watching and listening to his activities in the Lebanon.

He said he has ‘ discovered’ spying equipment at his former apartment in Beirut (he has since moved to live elsewhere in the city), placed there, he insists, by MI6 operatives using a ‘freshly made key’.

But as I witnessed this week, the British government and intelligence services do not need to travel to the Middle East to discover exactly what he and his followers are plotting.

Indeed, many might argue that it beggars belief that we in Britain allow a voice to those who want nothing less than our destruction.