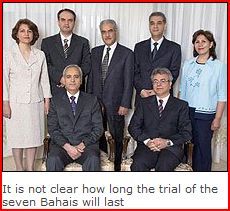 BBC NEWS… Seven members of the Bahai faith in Iran are to go on trial on Tuesday on charges of spying for Israel and of “insulting sanctities”.

The Bahai faith is banned by the Islamic revolutionary leadership of Iran which considers it heretical.

Bahais claim some 300,000 members in Iran, where the faith originated.

“The trial of the seven Bahais accused of spying for the Zionist regime of Israel and insulting sanctities will be held on Tuesday,” Hassan Haddad of the Tehran’s prosecutor office said, the official Iranian news agency reports.

Last year relatives of the six Bahai leaders arrested in May said they had been taken to Evin Prison in Tehran after intelligence ministry officers raided their homes in the middle of the night.

Hundreds of Bahai followers have been jailed and executed since Iran’s Islamic revolution in 1979, the Bahai International Community says.

However, the government denies it has detained or executed people because of their faith.

The Bahais consider the man who founded their faith in the 19th Century, Bahaullah, to be a prophet.