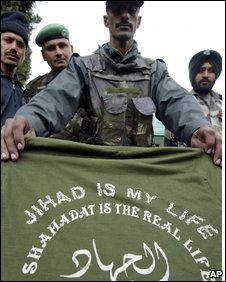 The Pakistan-based militant group Lashkar-e-Taiba says it was involved in a five-day gun battle with troops in Indian-administered Kashmir.

At least 25 people died in fighting at Kupwara, including eight soldiers.

Lashkar-e-Taiba is the group which India holds responsible for the armed attacks in Mumbai last November in which more than 170 people died.

The army says the militants were well trained and equipped and had the backing of agencies in Pakistan.

“The maps and communication equipment [recovered from dead gunmen] indicates that [Pakistani] state and security forces’ assistance was there as such material is not available in the civil domain,” Brig Gurmeet Singh told a press conference in Srinagar on Wednesday.

“The majority of the militants have been killed and those left, if any, will also be eliminated.” END_OF_DOCUMENT_TOKEN_TO_BE_REPLACED