A new party will be up for elections in the German national elections on September 24, with the promising name ADD, “Allianz Deutscher Demokraten” (“Alliance of German Democrats”).
A Turkish gentleman named Ramzi Aru formed the AD Democrats out of protest in 2016, when the German Bundestag recognized the mass killings of the Armenians by the Turks as a genocide. According to Mr. Aru, this puts all German parties out of the question for Turkish voters. 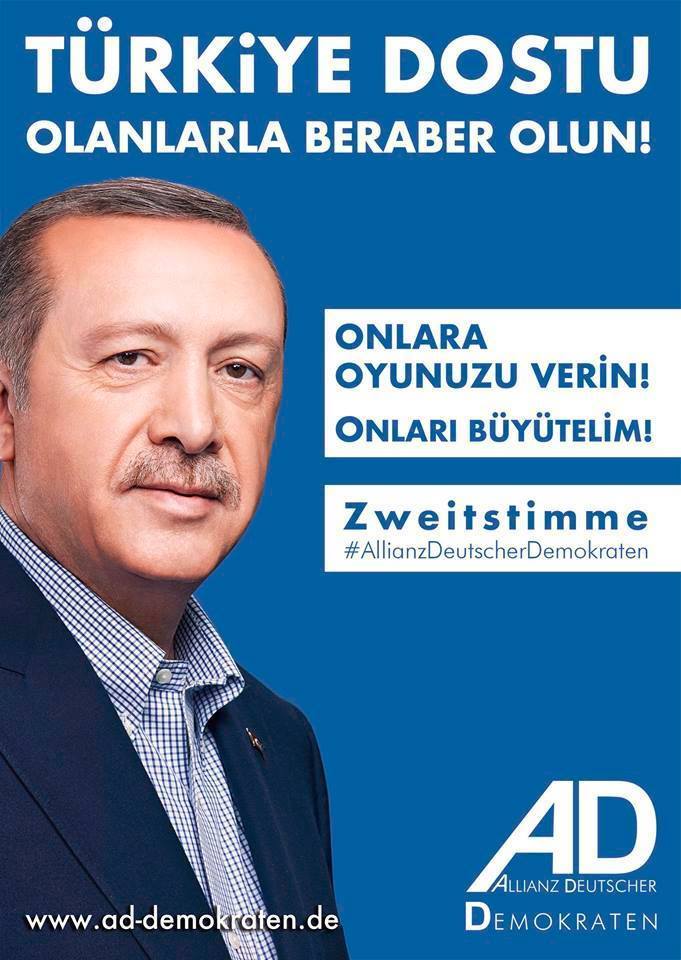 Wait – is that Turkish premier Erdogan on a German election poster?

Intrigued by the ADD poster for the German Bundestag election, which curiously appears to show the counterfeit of Mr. Erdogan, we went to their website to read their mission statement:

“The AD Democrats champion a communal right to vote for all foreign nationals and people without nationality who are of the necessary voting age, and who have been legally residing in Germany for a period no longer than a communal legislative period; independent of their nationality.
Whoever feels that their opinion matters, is already integrated. The communal right to vote must be granted to all people, to enable them to participate in the active forming of their direct environment.
Excluding people from the right to vote is a discrimination of them when exercising their political rights. Due to the demographic development, a growth of the population that is politically not represented is to be expected in the next years. Thus, in communities with a high proportion of foreigners, democracy-less areas will form. Foreigner Advisory Boards and Migrant Gremiums alone cannot replace the active democratic process. The AD Democrats champion that every foreigner receives the full right to vote on communal and national level after ten years of residence.
The AD Democrats also champion to grant families more political weight by giving the parents the right to vote for their underage children. This increased weight will mean that families will move into the center of the political processes, and family policies will automatically become more sustainable. Only who has a vote can be sure to be acknowledged politically; especially children.”

In what appears to be a Turkish jingoistic news portal, we found a report about the ADD’s party convention in Duisburg in November 2016.

Regular readers will recognize two familiar faces at the event: One of them is the German ‘journalist’, former Marxist, and convert to Islam Martin Lejeune (photo right). We covered his unfortunate little mishap at the Berlin Marathon, where he was shilling for Erdogan: Taking One For Team Erdogan (Gates of Vienna, April 8, 2017).

The gentleman on the left, speaking to Mr. Lejeune, is Mr. Ramazan Akbas, vice chair of the ADD. He is new to us, but from another news portal, Turkishnews, we larn that he has lodged a complaint against the aforementioned Armenia resolution of the German Bundestag, arguing that the resolution violates his human rights. His complaint was turned down, so now he is suing at the European Court of Human Rights. 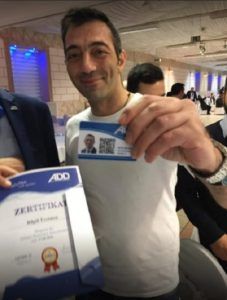 The other familiar face is, we learn, “the popular blogger from the Turkish immigrant community, Bilgili Üretmen”, here seen holding his membership card. We did not know that he was popular or a blogger, we only knew him from what appeared to be a nervous breakdown and a screaming fit directed at the German concert organizer Marek Lieberberg, when Lieberberg’s “Rock am Ring” event was cancelled due to a terror risk, and Lieberberg suggested that terror might have something to do with Islam (full story: Ramadan am Ring, Part 2, Gates of Vienna, June 11, 2017. Turn the volume down should you watch the video).

All in all, we think that with such personnel, and such programme, this newly-founded party is a welcome contribution to the diversity of the German political landscape. What could possibly go wrong?

(Thank you Gate of Vienna’s Baron Bodissey for suggesting the title of this article – and apologies for stealing it!)