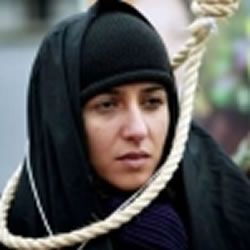 TEHRAN, Iran —  Iran has hanged a young woman who was convicted of murder when she was a minor, her lawyer said Saturday, drawing condemnation from international human rights groups who have sought to end capital punishment for juvenile offenders.

Authorities executed the 23-year-old woman Friday in northern Iran without informing her lawyer or allowing the family to be present, said the lawyer, Mohammad Mostafaei. She was 17 at the time the crime was committed, in 2003.

Iran executes more juvenile offenders than any other nation — eight last year and 42 since 1990, according to Amnesty International. Friday’s was the second such execution this year in Iran, Mostafaei said.

While a few other countries are known to have executed juvenile offenders in recent years — Saudi Arabia, Yemen, Sudan and Pakistan — Iran has accounted for more than two-thirds of such executions in the past four years, according to rights groups.

The U.N. Convention on the Rights of the Child, which Iran has signed, bans capital punishment for offenders who committed crimes before their 18th birthday. END_OF_DOCUMENT_TOKEN_TO_BE_REPLACED