1. New Zealand Doctor comes forward with horrifying truths about the payola behind the clot-shots

“At some point, it dawned on me: this is not so much about health, but more about politics, money, power, and social manipulation.” – Doctor René de Monchy

Veteran New Zealand doctor René de Monchy’s career came to an abrupt halt after refusing to be vaccinated. Wanting to remain “vaccine-free,” the physician of over 48 years was fired, banned from his hospital, and not allowed to say goodbye to his patients.

The general practitioner and psychiatrist is shining a spotlight on the Globalist forces using Covid to help them seize control of New Zealand. The brave doctor questioned why doctors and patients receive monetary “vaccine” incentives. Furthermore, Dr. Monchy believes the actual number of people who have died from the vaccines is not reported, and relatives of those killed from the injection are receiving “hush money.”

Critical From The Begining

From their inception, Dr. Monchy was very critical of the “experimental, never-before-used mRNA vaccines.” The Doctor disagreed with the vaccine’s “lack of a control group and long-term outcomes,” reports the Doctors Collective. Even more so, the Doctor is outraged that the injection is being promoted to children and pregnant women,

2. Austria looking to hire people to hunt down vaxx refusers, fine them, and make sure those fines are paid.

(Open in Chrome and translate) 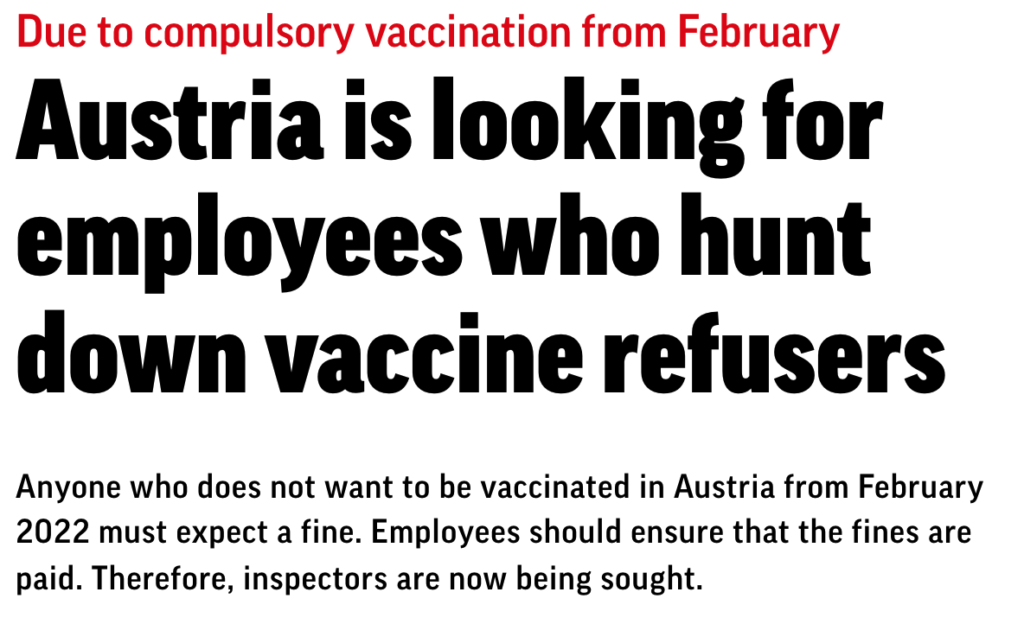 3. Protesters besiege the Parliament of Romania in Bucharest as it debates legislation to introduce “health passports” at workplaces

(This has the slight whiff of controlled oppo to it though. Seems awfully coordinated for grass roots.)

In news that you will likely not see anywhere today, government advisors in South Africa have suggested stopping tracing and quarantining those who have come into contact with Omicron because it isn’t helping to stop the spread of the variant, which for the most part causes no symptoms in those who contract it.

News 24 reports that the Ministerial Advisory Committee wrote to Health Minister Joe Phaahla “recommending that the quarantining of contacts be stopped as it is no longer viable in the current social and economic climate.”

The report also notes  “the committee said contact tracing was no longer necessary and should also be halted with immediate effect.”

The report notes the memo stated that “With only a small number of contacts identified from a proportionally small Covid-19 cases, quarantining was no longer effective for containing the spread of the disease.”

The memo also noted that “the proportion of people with immunity to Covid-19 had risen substantially… exceeding 60-80%.”

The memo also said that testing is ‘highly skewed’ because the majority of people who are getting Omicron do not even experience any symptoms.

The advisors warned of the negative effects of shutting down the country when the variant doesn’t warrant it.

“On an individual level, the consequences of prolonged quarantining include loss of income, loss of employment, and loss of schooling time. We propose that quarantining be discontinued with immediate effect for contacts of cases of Covid-19. This applies equally to vaccinated and non-vaccinated contacts. No testing for Covid-19 is required irrespective of the exposure risk, unless the contact becomes symptomatic. We further propose that contact tracing be stopped.”

The advice echoes that of South African scientists and officials who for days now have been urging that mass panic over Omicron, which originated in the country, is unnecessary and dangerous.

President Joe Biden will mail 500 million rapid COVID tests to homes across America, deploy 1,000 medical personnel to hospitals and set up new federal testing sites as part of the Omicron battle plan he will announce in full on Tuesday afternoon.

He will also issue a stark warning to the 40 million unvaccinated Americans and assure the rest of the country they won’t have to cancel their Christmas plans, despite a surge in cases across the country.

The administration is not calling for any new lockdowns or travel restrictions and will instead address existing steps like masking indoors, testing, and vaccines. The White House will also set up a website where Americans can order free at-home virus tests just two weeks after Press Secretary Jen Psaki rejected the idea and sarcastically said: ‘Should we just send one [test] to every American?’

Biden will tell the nation ‘we know we have the tools to get through this wave,’ according to a senior administration official who briefed the media on the effort – including the new testing component.

He will speak less than 24 hours after America recorded its first Omicron-related death – a Texas man in his 50s who was unvaccinated and had already been infected before – and with lines building at testing centers across the country.

(Interesting. Canada is doing the same with these faulty tests. I guess the idea is that they drive up the case numbers enough to implement the restrictions they want but maybe after Christmas. The instructions on the Canadian site for these tests is that you can only use them on “asymptomatic people” formerly known as healthy. As these tests have a high false positivity rate, it can only be to drive up ‘case’ numbers.)

5. Paul Weston asks the questions we secretly ask ourselves

6. Pfizer adds microchip to meds as a means of forcing compliance. Yes, the only thing that stops reality from becoming the darkest possible conspiracy theories is your imagination.

Thank you all for your links and stories, and for preserving your sanity in the face of growing divisions and anger and misunderstandings. As much as I dislike the 2 new South Park 1 hour episodes, that part they got right.

6 Replies to “Vaxx payola, and Pfizer continues its monstrous streak: Links 2 for December 21, 2021”