The way in which giant tech propaganda outfits like Twitter, Facebook and Youtube manage to be truly dangerous and dishonest to half its users, is by pretending more or less to be even handed about collectivist vs individualist, communist vs. liberal ideas while in reality, getting liberal or individualist people to burn out all their time and effort creating, thinking and writing to counter communist and fascist ideas, but making sure they cannot reach a wider audience than those deeply already committed to those ideas. And often not even reaching them.

The people who are so effective they are, one might say, ‘breakthrough posters’ like James Woods or Donald Trump,  just get banned, as the blowback from being banned is less dangerous to the collectivists than the deceptive ‘shadow banning’ using all kinds of mathematical techniques to limit the visibility of a counter-revolutionary idea.

The creator of the PCR test said it was never to be used as a diagnostic tool, its meaningless that way and was not intended or created for that purpose and called Fauci some pretty harsh names for his fraudulent use of the PCR test.

We also saw that right after Biden was elected, they reduced the cycle threshold to 25 from over 40 for all vaccinated people. This proves it was meant to generate high case numbers in some cohorts and now not in another. The obediently vaxxed.

Countless doctors and nurses have come out against using this test as it means worse than nothing. It often misdiagnoses the flu as Covid19. In fact that is now official. The PCR has been recalled by the CDC for exactly that reason. Also, for the first time in medical history, a “case” means someone with a + PCR test as opposed to a sick person having had a proper differential and given a diagnoses. Now, they test healthy people with PCR, and if it shows as + it becomes a “case”.

So yes point one is made. It was proven fraudulent.

Its becoming impossible to avoid the fact that the vaccinated seem to have the same risk of Covid as the unvaccinated, certainly after 6 months has passed since the second shot, and those that have taken the vaccines may actually have some additional risk. So it’s reasonable to say that this woman may be understating her own case in this tweet. Certainly there are a great deal of experts who would say so, not the least of which is the creator of the mRNA tech himself, Robert Malone MD. and the former VP of Pfizer, Micheal Yeadon.

So its more revealing of Twitter itself than it is of Albertan Beech when you see this message: 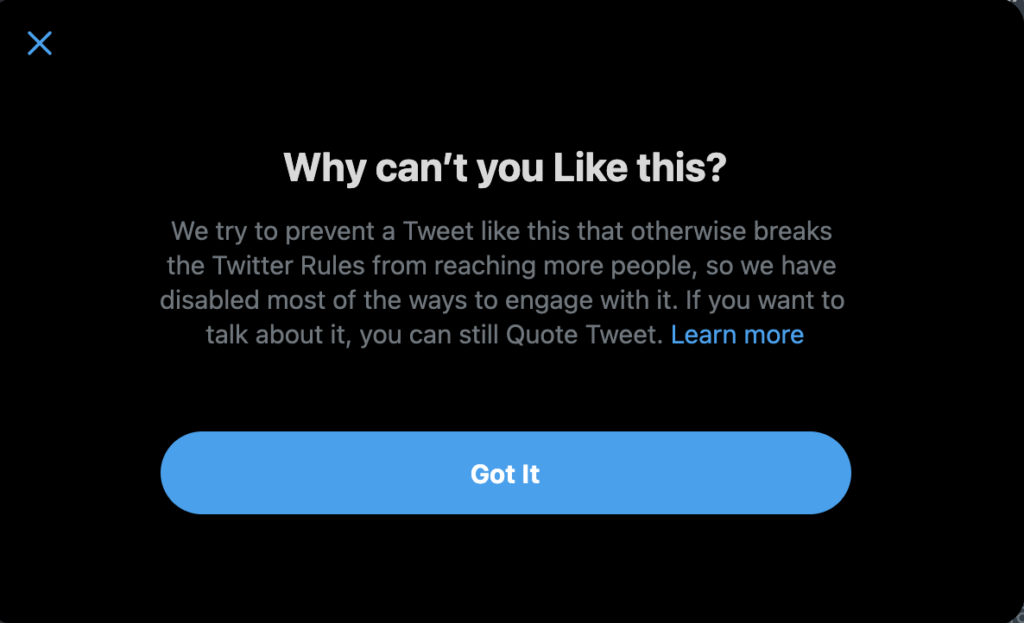 To Twitter’s credit, this is more honest than what they usually do. Which is covertly stop a post from getting seen. But sometimes I guess they feel its worth going the extra mile to fuel the revolution and keep the chocks under the wheels of the freedom loving.

One Reply to “Twitter is not a platform, it is Judo propaganda”