An Islam-critical leader in Norway was violently attacked by a Muslim mob in Bergen. The incident makes the Progress Party, which is in the government, react strongly.

– We are on our way to the Swedish state, warns the former Minister of Immigration Sylvi Listhaug, writes in Document.

Violence and total chaos arose when Islam-critical SIAN (Stop the Islamization of Norway) held a demonstration at Festplassen in Bergen on Saturday. […]

Wisconsin Democrat Gov. Tony Evers declared a state of emergency Tuesday over the riots burning down businesses, destroying neighborhoods, and terrorizing communities in Kenosha and Madison.

After outlining recent events that protesters say justified taking to the streets this summer, such as George Floyd’s death in Minneapolis police custody and Jacob Blake’s shooting by police in Kenosha, Evers celebrated Wisconsin protestors for having “taken a stand” against “systemic injustices,” before condemning the riots.

“Unfortunately, some individuals have deviated from peaceful protests and engaged in unlawful, harmful, and dangerous activities, including arson, which has endangered the lives of other protestors and bystanders, which cannot be tolerated,” said Evers.

3. About that man who was attacked for trying to put out the fire at his own store that was started by the insurgents.

For trying to put out a fire in his mattress store

He received a broken jaw, black eye, and multiple stitches

The remains of the building he tried to save, now rubble, can be seen in the background #kenosha pic.twitter.com/HbcatRHy3S

4. Odd poetic look at the riots in Wisconsin

5. Will the fine caring people in this video be made to suffer by leftists and not assisted whatsoever by their own institutions for their support of white people murdered over nothing at all?

6. Edward S. May: »Forced migrations have enabled the uncontrolled Islamization of Western civilization!«

(An interview with the owner-operator of the excellent site, Gates of Vienna, which was our inspiration to create this site)

Please tell us when and under what circumstances did you first became politically active, how would you describe your views, and which authors and thinkers influenced you the most?

I’m not really politically active; I just edit and write for a blog that posts some political content. Its primary focus is on the danger posed by Islam.

My late wife and I started the blog in October 2004. After I got laid off from my job in 2006, I became involved with it full-time.

I am a conservative with libertarian tendencies, without any allegiance to a political party. On the issue of Islam, I was greatly influenced by V.S. Naipaul (his book  Among the Believers) Srdja Trifkovic, and Maj. Stephen Coughlin. On more general political issues, I would cite Thomas Sowell and Mark Steyn as major influences.

Can you tell us a bit about your blog »Gates of Vienna? Its purpose, main topics, number of authors, and the story behind its name?

The mission of Gates of Vienna is to propagate reliable, comprehensive information about Islam and the Islamization of the West. In order to do this thoroughly, it has to deal with other cultural and political issues, in particular the Frankfurt School’s »long march through the institutions«, which is what has enabled and supported Islamization for the past fifty years.

I concentrate on Europe, because that’s where Islamization is the most advanced. France, the U.K., and Sweden are the farthest down the road towards becoming Islamic states. The authors at our blog were originally just my late wife and myself. However, we gradually accumulated a number of guest-posters and correspondents, including Fjordman, El Inglés, Seneca III, H. Numan, MC, Paul Weston, Elisabeth Sabaditsch-Wolff, Michael Copeland, and numerous others. GoV has more here […]

7.  More evidence that teh CBC is enemy propaganda. Watch how the persecute a man and his wife for having anti-authoritarian views and quoting Thomas Jefferson!

Long time readers of this site might remember how Paul Weston was arrested and taken to jail for reading out loud from Winston Churchill’s book, The River Wars. This quote is far less problematic than that and Churchill was not problematic. His quote from the River Wars was his assessment of the nature of Islam with which many would agree. But CBC connected a member of the 3 percenters to other members who have racist sentiments to other groups they are not even part of! The sort of thing communist groups used to complain about as “guilty by association”. Notice how at the 1 minute mark they show a social media post with a quote: “When injustice becomes Law, rebellion becomes duty”. 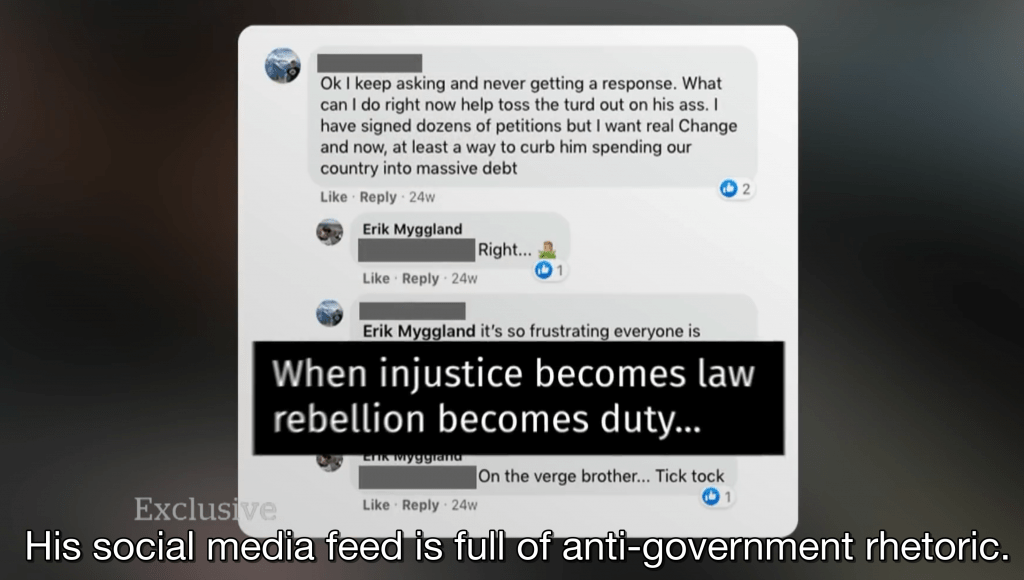 This quote is widely attributed to Thomas Jefferson and although it does express much of his writing, it appears that it may not be literally from Jefferson. But this is:

The tree of liberty must be refreshed from time to time with the blood of patriots and tyrants. It is it’s natural manure.

The point is, the three percenters are a libertarian, anti-authoritarian, and anti tyrannical organization. They are the militia that the US 1st Amendment specifically recommends. And the CBC defamation of one of its members and his wife, even by connecting them to Soldiers of Odin, (who indeed have as core principles racist ideas) is why the CBC must be defunded. In a free society, they should have the same right to broadcast as anyone else with their own money and resources. but the government funding them to over a BILLION a year and limiting competition with the CRTC (See how SUN TV was treated in the twenty teens) is a symptom of the kind of tyranny the threepers oppose. So I guess we can see why the CBC victimized these people.

9. Swiss Told to Integrate With Foreigners Because ‘Mass Migration Can’t be Stopped’

Swiss people need to take classes on integrating with foreigners in order to get used to “becoming a minority” in their own country, a sociologist has said.

Ganga Jey Aratnam, who migrated to Switzerland 25 years ago, told an interview with Tages-Anzeiger that mass migration to the Swiss nation “is a one-way street, there is no going back”.

Switzerland’s native people should let go of the country’s historic customs and traditions as its population is replaced and come to recognise “hyper-diversity” as the national culture, the Sri Lankan academic said, arguing that “Swiss culture is not lost, it is developing”.

Asked whether he recognised that such a transition might be “overwhelming” for naive Swiss people, Aratnam responded: “That’s why I think there should be integration courses for locals.”

“We already have integration courses for immigrants. That is a good thing. Such courses are also necessary for locals because they are slowly becoming a minority.”

(Maybe its time for the Swiss to detonate all those explosives they have buried at every port of entry, tunnel and road)

…TODAY, I will be sending federal law enforcement and the National Guard to Kenosha, WI to restore LAW and ORDER!

There is a great deal of work to do yet today, including editing of videos as well as some new Brad Johnson videos.

Thank you to all who sent in materials so far this week and please stay tuned for more later today.